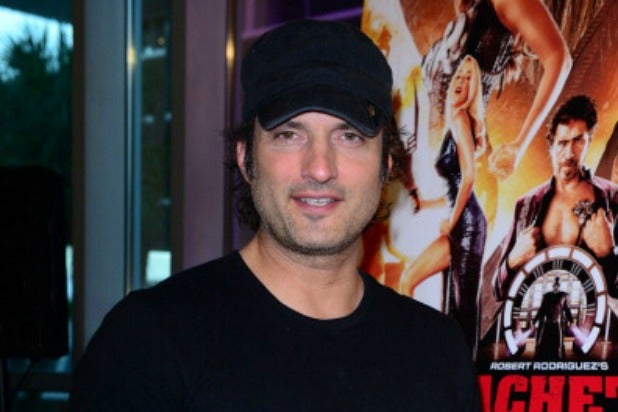 Rodriguez’s two “Machete” films have brought us Robert DeNiro as a crooked Texas senator, Sofia Vergara as a man-hating madame, Mel Gibson as a racist villain with plans to make Mexicans do manual labor in space, and Charlie Sheen as the president of the United States. Rodriguez promises his new network, a partnership with Univision, will have the same surprising guests.

“I just have a real love of actors and finding actors that I’m big fans of and pairing them with roles that they don’t usually get to play,” he told TheWrap at a Television Critics Association panel Sunday.

“That’s usually why I’m able to cast really stellar actors. I’m not going to them and saying, hey, come do the thing you just did,” he said. “I offer them a role they don’t usually get to play. With a level of creative freedom that’s just unprecedented because I’ve have my own studio down there [in Austin]. There’s no other producers around, there’s no one to tell them anything except, ‘Go.'”

Among the shows with impressive casts are “From Dusk Till Dawn,” an adaptation of Rodriguez and Quentin Tarantino’s 1996 film. The cast includes Wilmer Valderrama and Don Johnson.

“We have an incredible cast just in the first show of ‘Dusk.’ And we will continue that because when there’s quality work and there’s kind of creative freedom, you know, word’s gotten out over the past 20 years. Actors tell their friends. That’s why Robert DeNiro will show up on ‘Machete.’ He’ll hear from George Clooney that you should just go to Austin and enjoy the ride.”

He promises El Rey “will be a direct pipeline.”

“You come to me with an idea, we’ll put in on the network if we like it,” he said.

Among the projects in the pipeline: A new series about a lucha libre wrestling league from “The Bible” and “The Voice” executive producer Mark Burnett. The series will follow masked wrestlers in a new league that will be launched for the show.