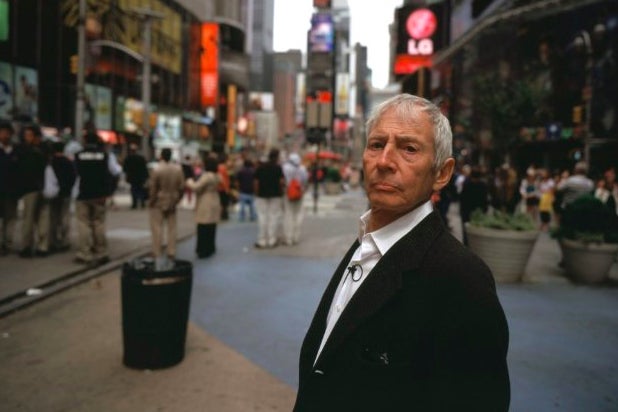 “The Jinx: The Life and Deaths of Robert Durst” racked up 35,000 tweets on Sunday night, which were seen 11.1 million times by 2.8 million people, according to Nielsen Twitter TV Ratings.

The finale of the HBO documentary series finished third on the night in Impressions via the popular social media site, behind AMC’s hit sensation “The Walking Dead” and ESPN’s “30 for 30” doc “I Hate Christian Laettner.”

A pair of E! shows — “Keeping Up With the Kardashians” and “The Royals” — finished fourth and fifth, respectively, per the rankings.

The disturbing and shocking finale of “The Jinx” concluded with subject Robert Durst muttering to himself into a live microphone off-camera: “There it is. You’re caught.?What the hell did I do? Killed them all, of course.”

Durst was arrested in New Orleans on Saturday?on murder charges. The real estate heir is set to return to Los Angeles to face a murder charge for the 2000 shooting of Susan Berman.

Durst’s apparent confession came after he was asked about handwriting similarities in a letter he wrote, and another linked to the death of his friend, Susan Berman, who was shot to death inside her home in the Benedict Canyon area of Los Angeles in 2000.

Here are some Hollywood reactions to the ending of the six-part HBO series, including tweets from Jimmy Fallon, Anna Kendrick and Patton Oswalt, among others:

You have two hours to prepare (binge) for #TheJinx finale tonight at 8 on HBO. It is so good and scary and real. I suggest ep 1 & 5.

Thanks, The Jinx, for ruining my chill forever — Kat Dennings (@OfficialKat) March 16, 2015

So many questions after #TheJinx finale! When was that interview taped? When did Jarecki & co go to the police w the letter? #bestfinaleever — Mandy Moore (@TheMandyMoore) March 16, 2015

If you haven’t watched #TheJinx on HBO. Watch it now. All of it. It’s awesome. The final scene? Craaaaaaazy

I’m not good at poker, but I would go home rich against Robert Durst. #thejinx

#TheJinx = if Gollum was a billionaire.