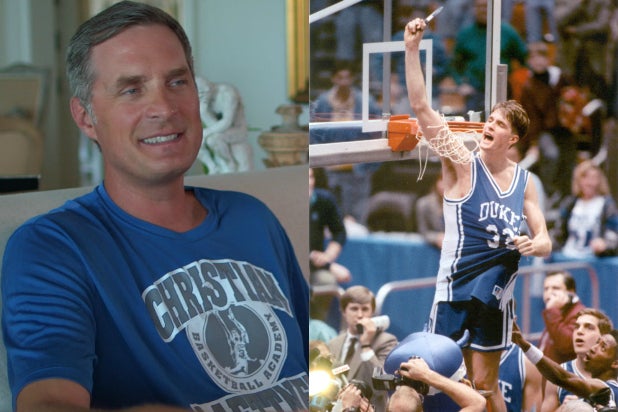 Christian Laettner was such a legendary college basketball player that people automatically assume his professional career, which actually spanned 13 NBA seasons, was a complete bust.

History is also not particularly kind to Laettner when you consider that the former Duke Blue Devil was one of the most disliked athletes in the NCAA archives — and that national hatred is exactly what ESPN’s “30 for 30” focused on.

The documentary tells the tale mostly from the perspective of those who couldn’t stand the cocky, good-looking, talented, white prep school basketball star — but it’s countered by interviews with Laettner, his family, former coaches and teammates.

From stomping on the chest of a downed player and battles with teammates, to a perceived sense of entitlement — there were many reasons for opposing fans to despise the smug star.

Though Laettner has mostly maintained a low profile since retiring from pro basketball with a bad back, all the former power forward/center needed to hear was “ESPN,” and he granted director Rory Karpf a three-hour interview for the project.

“Anytime the premiere sports channel calls you and says they want to do a movie about you, you’re going to say ‘Yes,'” Laettner explained in an interview with TheWrap.

Of course, the film wasn’t titled “I Hate Christian Laettner” when the Sports Emmy-winning Karpf came calling — or at least, the movie’s singular protagonist/antagonist didn’t know that. When the name was revealed to him, Laettner said he laughed and shrugged it off.

“You have a hard exterior and you’re used to it — strangers criticizing you,” Laettner stated, speaking in the second person. “So, I didn’t mind it and I knew it would be provocative, and it seems like in today’s day and age things need to be more provocative than anything.”

While he’s was fine with it, his family wasn’t too keen. “I knew that it wasn’t necessarily the best title in terms of my children and my wife and my parents and my siblings,” he added.

Still, having seen the final cut, Laettner called Karpf’s effort “awesome … excellent.” Plus, the titular hatred is (more or less) all in good fun now, nearly 25 years removed from the heights of his towering success at Duke.

Plus, time heals all wounds — even those created during March Madness. Laettner has since returned to the scene of many of his (totally legal, on-court) college crimes — most notably breaking Kentucky’s heart with an all-time great overtime buzzer beater in March 1992 — and has been more than willing to laugh at himself and history. And why not? He’s the guy who won everything, who dominated the competition.

Since those glory days of college hoops at the North Carolina private school, Laettner had a journeyman but solid NBA career. Laettner played 13 seasons for seven teams, and averaged 13.3 points per game, 6.9 rebounds, and 2.7 assists. He made one All-Star team, and was voted onto the All-Rookie First Team in 1992-93.

“It’s hard to live up to the expectations,” he said, summing up his pro days. “Besides that, I think I had a very good NBA career, and I’m proud of it.

“I might not have been an absolute monster, but I thought I did pretty good,” he added.

And the guy who spends most of his time coaching 6-to-14-year-olds at his Laettner Basketball Academy these days wishes he was still manning that post himself instead.

“I drastically miss it,” Laettner, who said he regrets not forcing himself to play through the pain for a few more seasons, told TheWrap. “I don’t watch an NBA games today because it makes me sad, I want to be back out there.”

Finally, there is no way a college basketball fan could interview Laettner without asking him about that shot against Kentucky, where he caught a three-quarter court heave from Grant Hill with 2.1 seconds left, dribbled once to the right, and sunk a turnaround jumper over his left shoulder to win at the buzzer.

“I didn’t have that actual move planned — I just knew that I had time where I didn’t have to rush anything,” Laettner recalled. “And then I thought to myself, ‘Just make a post move,’ because I knew the guys would be behind me.”

He added: “Beyond that, it was just instinct and feel.”

“I Hate Christian Laettner” premieres Sunday on ESPN at 9 p.m.