Robert Durst was hospitalized, the judge in his murder trial said on Thursday, after an “incident” involving his health.

Judge Mark E. Windham told the court, “Mr. Durst is not here. We understand he is in the jail hospital because of some incident this morning involving his health.”

According to Law&Crime, Deputy District Attorney John Lewin questioned the legitimacy of Durst’s condition and told the judge that Durst has told people in jail that he plans to fake dementia in an effort to secure a mistrial. 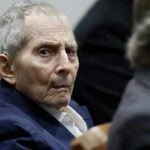 “So, I have no idea whether this is legitimate or not, but obviously, given his history, it is certainly suspect as to what his actual condition is,” Lewin said.

Durst’s defense filed two motions for mistrial on Wednesday, so Lewin said it was “very clear that the defense and the defendant want this trial to go away.”

The jury was sent home and the trial will resume on Monday.

Robert Durst, the real estate heir and subject of the HBO docuseries “The Jinx” that aired recorded audio of him seeming to confess to killings, has pleaded not guilty for the 2000 murder of Susan Berman. His trial first began on March 4 but was soon postponed to April 6 due to the pandemic. By late March, a spokesperson for the Superior Court of California said that the proceedings would be delayed once again to May 26. The date had been postponed for a third time to June 23, and then again to July. 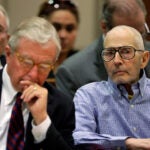 Lewin has said the prosecution believes Berman knew her killer, saying there were no signs of a struggle, no sign of a break-in and her purse and credit cards were still in the home. Lewin said, “Susan knew her killer. She freely and voluntarily admitted this person into her house.”

Durst was arrested in March 2015 by FBI agents in New Orleans, one day before the finale of HBO’s “The Jinx,” which chronicled Durst’s life and the death of three people close to him — Berman, his first wife, Kathleen McCormack, and a neighbor in Galveston, Texas. He was not charged with the disappearance of McCormack and acquitted in the death of the neighbor.

Robert Durst was previously acquitted of murder in Texas after he said he killed and dismembered his neighbor, Morris Black, in self-defense in September 2001. He is also suspected of killing McCormack, who disappeared in New York in 1982 — however, Durst was never charged.