Deep pockets aren’t the only potential foe when you take on the NRA, according to Peabody Award-winning documentarian Robert Greenwald — there’s also angry people with guns.

Greenwald (above middle) sat for a discussion about guns and violence on Thursday, part of TheWrap’s GrillChat series, and the Emmy nominee touched on the challenges of his latest film “Making a Killing: Guns, Greed and the NRA.”

“We took some steps to be careful,” Greenwald said. “The only way to avoid any danger was not to do the film. You’re dealing with people who have access to weapons. Tempers can be irrational.”

When asked if he received death threats during the making of the documentary, which tracks the influence members of the gun lobby exert on politicians, Greenwald declined to give details — but did said he’s used to harassment in following his previous films about the Iraq War.

“My bar is set pretty high thanks to my Iraq war films, we were getting dozens of death threat phone calls a day,” he said, referring to projects like 2004’s “Uncovered: The War on Iraq.”

“But it [‘Making a Killing’], presented a challenge. There were challenging days,” he told the crowd of influencers at TheWrap Studios, which included the film’s executive producer, Bill Benenson. 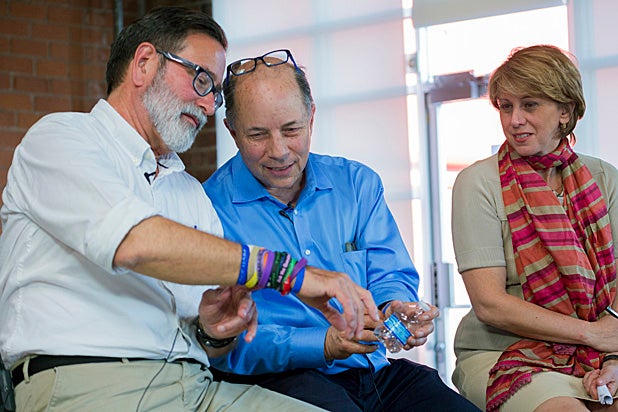 The discussion was led by Sharon Waxman, editor-in-chief and CEO of TheWrap. Greenwald was joined by Richard Martinez (above left), an activist whose son, Christopher Ross Michaels-Martinez, was killed by 22-year-old Elliot Rodger during a 2014 shooting spree at the University of California, Santa Barbara.

In the aftermath of Orlando’s Pulse Nightclub massacre, which has been labelled the worst mass killing in U.S. history, the debate over gun regulation has exploded on social media, cable news and in the government buildings in Washington, D.C. this month.

“The NRA is a minority in the country and we’ve let them get away with it[gun violence],” said Martinez, now a senior associate of the web-based movement Everytown for Gun Safety.

The NRA has roughly 700 staff members in the organization. Everytown, on the other hand, is a collection survivors, mothers and politicians totally about 100.

A recent filibuster in the Senate led by Connecticut Senator Chris Murphy, followed by a sit-in at the House of Representatives, were both met with excitement, athough legislative change seems stagnant. Greenwald encouraged support for gun reform anyway, saying the movement could take a page from gay rights.

“The LGBT movement didn’t wait for Washington,” he said. “Public support won’t solve all the problems but it will solve some of them.”

Martinez recalled his 20-year-old son’s strengths in sports and academics with emotion, telling the audience how Chris had been planning to continue his studies in London and follow dreams of becoming a lawyer before his life was tragically cut short.

The conversation led to discussion of a frequent component of the gun safety debate — mental illness coupled with easy access to weapons.

“Yes, there are mentally troubled people but if you take the assault military rifle away from the shooter in Orlando and give him a knife or a hammer? It’s a radically different situation,” Martinez said.

While both speakers conceded that protocol like universal background checks might not end gun violence, but it’s a significant step in ending the sale “of a product designed to do one thing,” Greenwald concluded, “which is kill.”

“Making a Killing” is currently available for home viewing at request, and will seek larger distribution this fall. The GrillChat is an offshoot of TheWrap’s thought leadership conference The Grill, held annually in Beverly Hills, California.