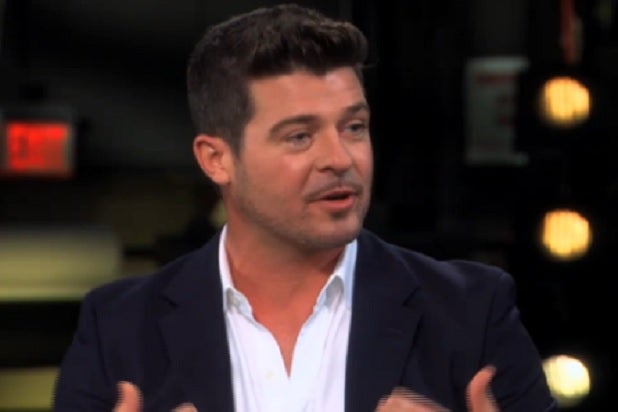 Robin Thicke attempts to distance himself from the controversy surrounding his MTV Video Music Awards performance with Miley Cyrus on Sunday’s “Oprah’s Next Chapter.”

The flap, he tells her, “is funny to me … it’s silly” — but he also blames Cyrus for whatever stir has been created.

For those who’ve been blissfully unaware of the situation for the past month or so, Cyrus and Thicke raised eyebrows at the VMAs with their performance, which featured the former Disney princess performing some grind-heavy dancing against Thicke’s Man Zone.

Thicke attempts to exonerate himself during the sitdown, claiming that he was a semi-innocent bystander — or, as  he puts it, the “twerkee,” referring to Cyrus’ gyrations.

“I’m singing my butt off, so I’m sitting there. I’m looking up at this guy, and I’m singing. I’m not really paying attention to all that. That’s on her,” Thicke tells Winfrey. “I’m like, people ask me, you know, do you twerk? I go, listen, I’m the twerkee. I’m twerked upon. I don’t twerk myself, OK? I’m just twerked upon.”

Here’s the pertinent excerpt from “Oprah’s Next Chapter” in the video.

It was the twerk seen round the world. In September 2013, singer Miley Cyrus made headlines for grinding against Robin Thicke during a performance on the MTV Video Music Awards. Find out why Robin says he was just “twerked upon” in that situation, and hear what he was really thinking in that moment.