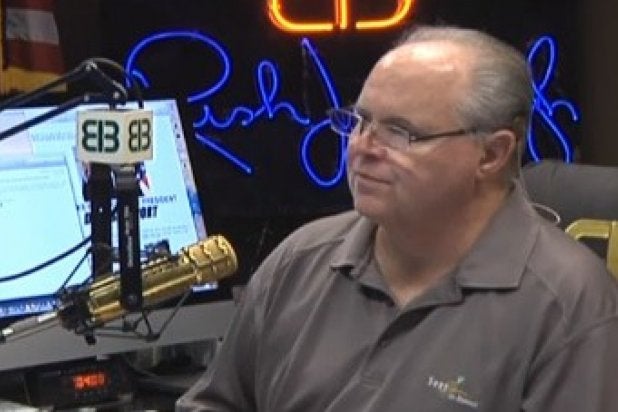 On Rush Limbaugh’s radio show Tuesday, he was asked about the apparent suicide of Robin Williams. A caller said that the media used to downplay celebrity suicide, but that this has changed, surmising that there was a political component to it.

Limbaugh responded by reiterating his belief that there is politics in everything, and that it’s present in this case as well. “This really is an example of the dedication the media has to pop culture events and how important it is in the eyes of their audience,” he said. “Whereas in Washington, the media thinks the world is on fire because of what’s happening in the Middle East, your average TMZ viewer thinks the world doesn’t make any sense anymore because Robin Williams committed suicide.”

The conservative talk show host went on to say that the media is “making such heroism out of this,” with coverage that is “fawning and glorious, and positive.” He said he hopes that it doesn’t lead to copycats “by people seeking the same kind of fame.”

According to Limbaugh, the social media age has spawned a group of people who share everything about themselves in hopes of getting the pop culture media to talk about them. “This is one way to do it, obviously,” he said. “To kill yourself is one way to get the media to spend a lot of time talking about you, if you want to be talked about.”

Robin Williams died Monday of an apparent suicide, according to preliminary findings by the Marin County coroner’s office. He had apparently hung himself, and had purportedly been battling depression, having checked into rehab as recently as July.

Also read: Robin Williams Found in Bedroom ‘With a Belt Secured Around His Neck,’ Coroner Says

Williams had a long history of addiction struggles with alcohol and drugs, though it is unknown if any were in his system at the time of death. It will take two to six weeks for results from toxicology testing to be available.