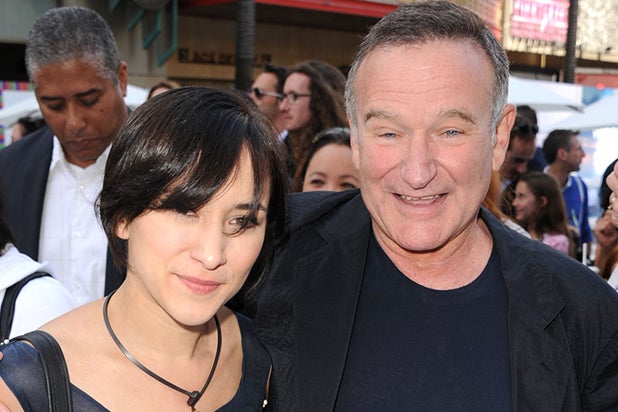 A day after actor and comedian Robin Williams was found dead of an apparent suicide at his California home at age 63, his children are expressing their grief, with Williams’ daughter Zelda declaring, “I feel stripped bare.”

In a statement released Tuesday, Zelda, 25, said that she had last spent time with him on his birthday, which was July 21. She also recalled that her father was “warm, even in his darkest moments.”

In keeping with family tradition, the younger Williams injected a bit of humor into her statement, warning haters that her deceased father would dispatch pigeons to defecate on their cars in exchange for their ill will.

“My family has always been private about our time spent together. It was our way of keeping one thing that was ours, with a man we shared with an entire world. But now that’s gone, and I feel stripped bare,” Zelda said. “My last day with him was his birthday, and I will be forever grateful that my brothers and I got to spend that time alone with him, sharing gifts and laughter. He was always warm, even in his darkest moments. While I’ll never, ever understand how he could be loved so deeply and not find it in his heart to stay, there’s minor comfort in knowing our grief and loss, in some small way, is shared with millions. It doesn’t help the pain, but at least it’s a burden countless others now know we carry, and so many have offered to help lighten the load. Thank you for that.”

Also read: Robin Williams Found in Bedroom ‘With a Belt Secured Around His Neck,’ Coroner Says

Zelda, who appeared with her father in the 2004 film “House of D,” added, “To those he touched who are sending kind words, know that one of his favorite things in the world was to make you all laugh. As for those who are sending negativity, know that some small, giggling part of him is sending a flock of pigeons to your house to poop on your car. Right after you’ve had it washed. After all, he loved to laugh too…”

She concluded, “Dad was, is and always will be one of the kindest, most generous, gentlest souls I’ve ever known, and while there are few things I know for certain right now, one of them is that not just my world, but the entire world is forever a little darker, less colorful and less full of laughter in his absence. We’ll just have to work twice as hard to fill it back up again.”

Williams’ 22-year-old son Cody also offered his thoughts on his father’s passing, saying,”There are no words strong enough to describe the love and respect I have for my father. The world will never be the same without him. I will miss him and take him with me everywhere I go for the rest of my life, and will look forward, forever, to the moment when I get to see him again.

“Yesterday, I lost my father and a best friend and the world got a little grayer,” he continued. “I will carry his heart with me every day. I would ask those that loved him to remember him by being as gentle, kind, and generous as he would be. Seek to bring joy to the world as he sought.”

Williams’ eldest son Zak, from his marriage to first wife Valerie Velardi, called the actor “my father and a best friend.”

Marsha Garces Williams, the actor’s second wife and mother to Zelda and Cody, said that her heart is “split wide open and scattered over the planet.”

“My heart is split wide open and scattered over the planet with all of you,” she shared. “Please remember the gentle, loving, generous — and yes, brilliant and funny — man that was Robin Williams. My arms are wrapped around our children as we attempt to grapple with celebrating the man we love, while dealing with this immeasurable loss.”

Authorities said Tuesday that Williams’ body was found by his assistant shortly before noon on Monday. The actor had one end of a belt secured around his neck and the other end of the belt wedged between a closed closet door and the door frame. The “Mork & Mindy” and “Good Will Hunting” actor also had superficial cuts on the inside of his wrist, Marin County assistant chief deputy coroner Lt. Keith Boyd told reporters Tuesday.