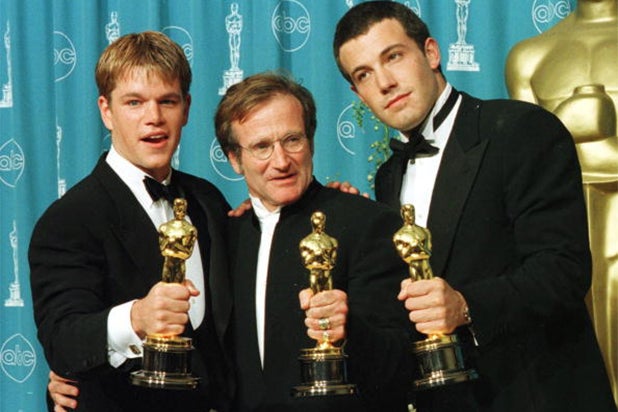 More celebrity friends and co-workers of Robin Williams have come forward to share their grief over the actor’s untimely death on Monday.

According to the Marin County coroner, Williams was found in the bedroom of his home “with a belt around his neck.” He died of asphyxia due to an apparent suicide. Williams was 63 years old.

“I feel stunned and so sad about Robin,” said his “Mrs. Doubtfire” co-star Sally Field in a statement. ” I’m sad for the world of comedy. And so very sad for his family. And I’m sad for Robin. He always lit up when he was able to make people laugh, and he made them laugh his whole life long…. tirelessly. He was one of a kind. There will not be another. Please God, let him now rest in peace.”

“It is devastating to fathom, Robin losing hope…” said Williams’ “Jumanji” co-star Bonnie Hunt in a statement. “I love him. He was a loyal friend and confidant, a special soul, so humble, so kind.  He lifted me up on my most challenging days. We shared many wonderful moments.  I cherish his friendship…my heart is broken.  All love and prayers are with his beautiful family.”

Chevy Chase and Williams were never real co-stars, though they did appear on an episode of “Saturday Night Live” together and were good friends. “Robin and I were great friends, suffering from the same little-known disease: depression,” said Chase in a statement. “I never could have expected this ending to his life, and to ours with him. God bless him and God bless us all for his LIFE! I cannot believe this. I am overwhelmed with grief. What a wonderful man/boy and what a tremendous talent in the most important art of any time – comedy! I loved him.”

“Heartbroken,” Ben Affleck, Williams’ co-star in “Good Will Hunting,” posted to his Facebook. “Thanks chief – for your friendship and for what you gave the world. Robin had a ton of love in him. He personally did so much for so many people. He made Matt and my dreams come true.

What do you owe a guy who does that? Everything.

May you find peace my friend. #RobinWilliams”

“Robin had more life in his little finger than most of us have In our entire bodies. He was dazzling and dear. What a horrible loss for all of us,” said Candice Bergen. Bergen was one of Williams’ last co-stars, having played his wife in holiday comedy “A Merry Friggin’ Christmas,” which is still awaiting release.

“Robin Williams died today. It seems surreal to write that,” said Lisa Jakub, who played the daughter in “Mrs. Doubtfire,” on her personal website. “But since writing is the way I process the incomprehensible — I find myself writing. Everyone is tweeting and facebooking and calling into radio shows about what a great talent Robin was. Yeah. He was. But that wasn’t what I adored about him. It was the fact that he was an incredibly kind human being.”

Jakub goes on to tell a touching story about Williams sticking up for her after her high school expelled her for being away on-location too much. “Robin stood up for me. He was in my corner. I was only 14, but I had already seen that I was in an industry that was full of back-stabbing. And it was entirely clear that Robin had my back.”

Williams’ “Dead Poets Society” co-star Josh Charles, now known for “The Good Wife,” also weighed in, on Twitter. “Your humor, like hot jazz, was topped by your sensitivity, compassion & kindness. Standing on my desk for you, always. #RIPRobinWilliams”