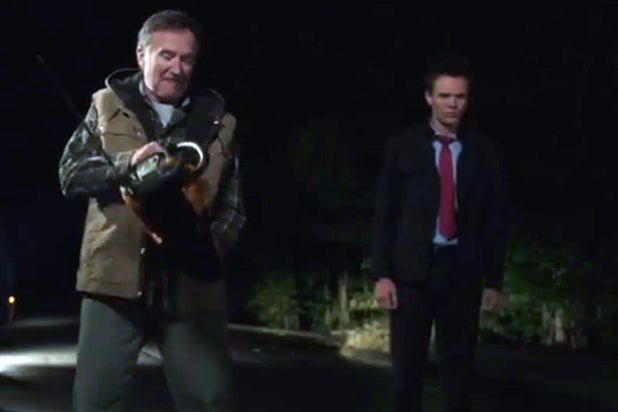 Robin Williams died Aug. 11, but the first trailer for his film “A Merry Friggin’ Christmas” shows why he’ll always be remembered.

The raunchy Christmas comedy stars Joel McHale as a man forced to spend the holidays with his overbearing, surly father (Williams).

“Look at this pile of crap, this country is so damned excessive it makes me want to puke,” Williams says at one point.

“I’m sorry I didn’t cuddle you enough,” the late comedian yells at McHale in another.

There are a load of physical gags, too. Williams sprays down McHale with a fire extinguisher and takes a chainsaw to a man dressed like Santa Claus.

Directed by Tristram Shapeero and written by Michael Brown, “A Merry Friggin’ Christmas” is one of Williams’ final projects (along with “Night at the Museum: Secret of the Tomb,” which hits theaters in December). The movie also stars Lauren Graham and Clark Duke.

“A Merry Friggin’ Christmas” will have a limited theatrical release on Nov. 7.