Robin Wright and Billy Bob Thornton are set to star in a thriller from director Ben Young called “Where All Light Tends to Go,” an individual with knowledge of the project told TheWrap.

Bankside Films will be introducing the movie to buyers and production is scheduled for November.

Hopper Penn also stars in the film, which comes from a script by “Appaloosa” writer Robert Knott and is based on a 2015 novel of the same name by David Joy. 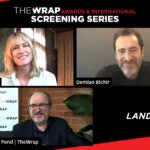 “Where All Light Tends to Go” is set in the Appalachian Mountains and is a thriller about a boy whose father is a domineering and violent crime lord, but when he meets the girl of his dreams and looks to escape his father’s control, he has to go head to head with his father who will stop at nothing to keep control.

Robin Wright will also produce “Where All Light Tends to Go” alongside Griff Furst of Curmudgeon Films, Josh Kesselman of Thruline Entertainment and Knott. Executive producing are Nathan Klinger and Ryan Winterstern. Ruth Bornhauser will co-produce. Michael McDermott is the film’s director of photography.