"Anvil! The Story of Anvil" scored an upset win Friday night at the International Documentary Association’s annual awards show — on a night when serious, Oscar-contending documentaries like "The Cove" and "Food, Inc." went home empty-handed.

"The message here is that a film doesn’t have to be serious for it to be profound," said a shocked Sacha Gervasi, director of the affectionate film about an often-hapless Canadian hard rock band whose lengthy career often resembled a real-life Spinal Tap.  The film received the IDA’s Distinguished Feature Award, after being named recipient of the organization’s Music Award earlier in the week. 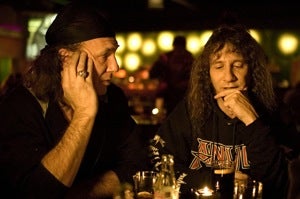 In the top category, "Anvil" (left) beat "Food, Inc." and "Mugabe and the White African," both short-listed in the Oscar documentary feature category, as well as "Afghan Star" and "Diary of a Times Square Thief."

"Garbage Dreams," also on the Oscar shortlist, won the IDA/Humanitas Award, a new honor established this year to salute a film "that strives to unify the human family."  According to one member of the jury that selected the Humanitas Award, some on the committee strongly lobbied for "Anvil!" here as well, feeling that its message of hope and perseverance fit the category.

In the Pare Lorentz Award competition, Oscar frontrunners "The Cove" and "Food, Inc." both lost to the HBO-produced "The Final Inch."

Errol Morris received the IDA’s career achievement award, which was presented by his friend composer Philip Glass. The film clips used to salute and summarize Morris’ career were drawn from such films as "The Fog of War" and "The Thin Blue Line," although they culminated in a segment from the film he made to open the Academy Awards show in 2002.

The IDA show took place at the Directors Guild and was hosted by Philip Glass’ cousin, Ira Glass, host of the TV and radio program "This American Life." Glass was introduced by IDA president Eddie Schmidt as "a man whose voice has inspired so many crushes he’s known as the Zac Efron of public radio."

In Glass’ opening remarks, he described the job of a documentary filmmaker as using "all the tools and tricks to get an audience to care about something it has no interest in at all."  Then he introduced a film saluting the documentaries of 2009 — though the film made liberal use of clips from docs that had not been nominated, including Michael Moore’s "Capitalism: A Love Story" and James Toback’s "Tyson."  Curiously, it also contained a glimpse of the Sacha Baron Cohen comedy "Bruno," a mock documentary but certainly not a real one.

Seven of the evening’s winners had been announced on Monday, ending the suspense in all but the final two categories, short documentary and feature documentary.  A press release announcing the winners in those categories was sent out Friday afternoon, with announcements embargoed until the show’s eight p.m. start time.

But the wins came as a shock to Gervasi, who dropped a jubilant F-bomb at the beginning of his speech, then stepped back to collect himself as producer Rebecca Yeldham spoke.

"I had no idea I was going to win," said "Salt" co-director Michael Angus during the post-show reception, after stepping outside to call his family in Australia.  "In fact, when I showed up they didn’t even have a seat for me, which I took as a bad sign."