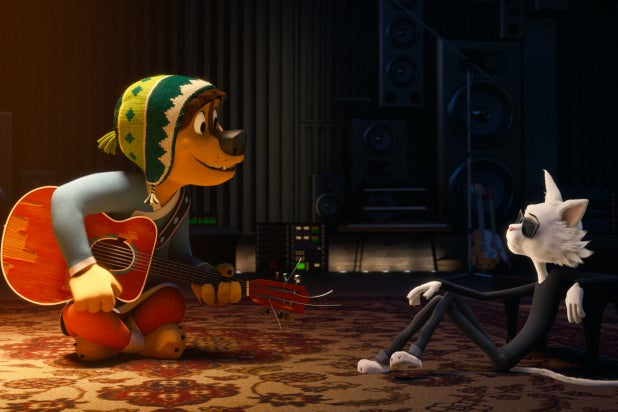 Don’t get too excited, geologists: “Rock Dog” isn’t about an animal into minerals. It’s music that stirs the mountain mastiff in this sweet if ineffectual animated movie, purportedly the first instance of a Chinese animation property — an adaptation of Zheng Jun’s graphic novel “Tibetan Rock Dog” — outsourcing its production to America (“Free Birds” studio Reel FX).

With obvious nods to the melding of Eastern and Western cultures, and a hoped-for international appeal, the result is a low-key, simple — very, very simple — story of pursuing one’s dreams (and protecting sheep and foiling wolves) that never exactly soars as original entertainment, although it avoids the frantic, cheeky, attention-deficit ethos of so much mass-marketed kid fare.

The fact that “Rock Dog” prioritizes quiet charms and old-school silliness over winking obnoxiousness may make it a sleeper favorite for the family who’d rather ride a merry-go-round together than get jerked and tossed by the rollercoaster.

A hand-drawn prologue sets up the situation in picturesque Snow Mountain, a serene village of wool-making sheep looked over by Khampa (voiced by J.K. Simmons), a towering Mastiff with legendary defensive skills for battling vicious wolves. In his thirst for vigilance against intruders, though, Khampa has decreed that music be off-limits — boo! — under the belief that it’s an unnecessary distraction.

For his happy-go-lucky son Bodi (Luke Wilson), who’s already challenged at following in his dad’s footsteps, the rule becomes an albatross when a radio falls out of a passing airplane, and Bodi is introduced to the sweet-hot electric guitar licks of feline rock god Angus Scattergood (Eddie Izzard). As only an abstract epiphany sequence of tripping through neon lights in space can signify, Bodi’s found his dad-defying calling: rock-and-roll stardom.

Also Read: 'Lego Batman Movie' Is 'The Best Batman Film in Years' And 8 Other Soaring Reviews

Venturing into the big city with his knit beanie, big eyes, and an unassuming sanxian (think Kubo’s lute) for an axe, neophyte Bodi good-naturedly assumes he can just join any struggling band in the musicians’ park, and drop by his idol Angus’s fortified mansion for rock lessons. Bodi, though, is more in demand than he realizes: paranoid recluse Angus, late on delivering a new hit single, sees in Bodi’s raw talent something worth exploiting. Meanwhile, a shadowy wolf duo (featuring Kenan Thompson). led by a mob-boss-like figure named Linnux (Lewis Black), is ready to capture Bodi and use him to breach Snow Mountain.

A movie like “Rock Dog” isn’t built to make a whole lot of narrative sense: it has the modest discipline of an inoffensively diverting Saturday morning cartoon stretched out to feature length. If a guitar shred-off between Bodi and a cocky big cat (Matt Dillon), or Izzard’s jokey riffs on petulant, lonely showbiz narcissism, or a dumb sight gag in the vein of Frank Tashlin/Jerry Lewis, puts a smile on you or your moppet’s face then co-writer (with Kurt Voelker) and director Ash Brannon (“Surf’s Up”) has done his job.

Ambition isn’t this movie’s strong suit: “Zootopia” may be more narratively and stylistically complete in realizing a multi-species metropolis. (It’s unclear, for example, why the “Rock Dog” world’s technology is strictly pre-digital.) The “Kung Fu Panda” franchise may be more elegant and sweeping with its Asian-infused cultural trappings. Even “The Lego Batman Movie” makes resonant points about talent and fame. The lower-budgeted, more squarely designed “Rock Dog” is pretty Zen-like about its approach, though: “Here’s something sweet, here’s something cute, here’s Sam Elliott voicing a character named Fleetwood Yak, here’s some music, we’re moving on.”

A little more puzzling is how meagerly the world of rock music is deployed as an emotional throughline to undergird feelings of rebellion, freedom, or even toe-tapping joy. (If one of your few rights-purchased, recognizable song snippets is Radiohead’s mournful “No Surprises,” you’re missing the point of a movie with “Rock” in the title.) Bodi’s journey from zero to hero is, in fact, fairly mellow — it’s not the toughest gig Luke Wilson’s ever had, that’s for sure — and the big from-the-heart song he writes (for Angus) is a forgettable middle-of-the-road ditty that’s more background noise than earworm material. Nothing about the use of music in “Rock Dog,” in fact, is likely to send you running to fire up your classics playlist afterward.

The conclusion, which drags everyone to Bodi’s threatened home village for a showdown with the wolves, is on one level refreshingly abbreviated and non-feverish, but also anti-climactic in putting a bow on its theme of fulfilling one’s destiny. “Rock Dog” stays firmly in the realm of the pleasant but unremarkable, an air-guitar effort when a stab at virtuosity might have yielded something more memorable.