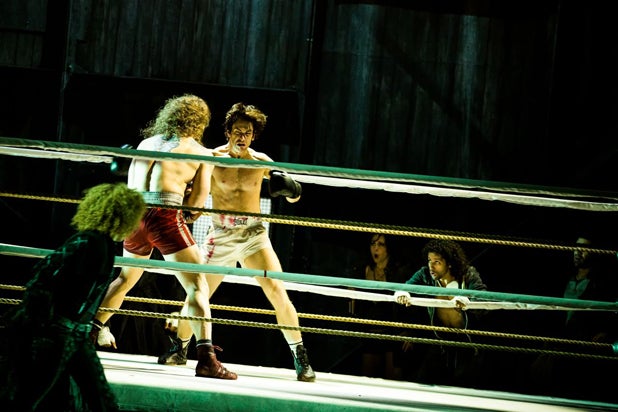 It’s never a good sign in a stage musical when the most rousing numbers are not written by the credited songwriters, in this case Stephen Flaherty and Lynn Ahrens for their Broadway version of “Rocky,” which opened Thursday at the Winter Garden.

Best songs here are “Gonna Fly Now” from the movie “Rocky” and “Eye of the Tiger” from “Rocky III.”

Those songs also appear to have been given the most stage time and are used for those famous montage moments from the movies when Rocky Balboa trains for the boxing matches of his life, with Apollo Creed. Of course, montage doesn’t mean much on stage, so together with those songs by Bill Conti, Carol Connors, Ayn Robbins and Survivor, stage director Alex Timbers has actors in hoodies run in place or across the Winter Garden stage as a black-and-white movie flashes behind them, giving us the streets of Philadelphia.

See video: Jay Leno Reminds Sylvester Stallone Why He Should Never Do a Musical

It would be silly to suggest that this stage “Rocky” in any way bastardizes the movie “Rocky.” Arguably, that movie has to be the worst ever to win the Oscar for best picture. What’s worse? “The Greatest Show on Earth”? “Braveheart”? “Crash”?

No, much worse is “Rocky,” which beat out such formidable 1976 competition as “All the President’s Men,” “Bound for Glory,” “Network” and “Taxi Driver.” So much for the Oscars having much to do with quality.

Back in 1976, Hollywood, as well as the American movie-going public, had fallen in love not only with the loser boxer from Philadelphia but the film’s backstory involving journeyman actor Sylvester Stallone, who, like his pugilist hero, stood standing until the final round of negotiations when the studio met his demand to be the star of his own screenplay.

“Rocky,” the musical, opens with a slightly less inspiring backstory, its creator having gone on to crank out no fewer than five movie sequels and now this stage version, which Stallone has co-written with veteran book writer Thomas Meehan.

Critics like to beat up on musicals nowadays because they aren’t totally original. It’s felt that musicals today borrow too much from the movies. Frankly, vintage musicals and classic operas have traditionally been based on some source material, whether it be plays, novels or poems. So what?

The problem with the “Rocky” musical is that Stallone’s script with its coy, condescending chats between a dimwitted boxer and his turtles or his equally mentally challenged girlfriend was pretty sodden even back in 1976. Stallone was going for Paddy Chayefsky’s “Marty” or Budd Schulberg’s “On the Waterfront” with their memorable scenes of unrequited love and failed dreams. But Stallone’s writing lacked the punch and turned bathetic.

Stallone and Meehan are faithful to that script, and on stage the dialogue plays even weaker than on screen.  The corny jokes and meet-cute lines don’t land or define character; they just sit there surrounded by dead air. Flaherty and Ahrens have merely punctuated that lame dialogue with their songs — or other people’s songs. Early in the show, there’s a hopeful moment when Rocky’s girlfriend, Adrian (Margo Seibert) sings “Raining.” The song does what songs do best; they give us the interior life of a character without resorting to what the movies often must provide: voice-overs or best friends who can listen to the lead character’s problems.

For a moment, with her dreams defined in song, Adrian emerges on stage much stronger than she ever did in the movie. But then she’s stuck with Stallone’s language from the film, as well as Talia Shire’s little knit cap and ill-fitting clothes.

A banal love duet, “Happiness,” also works to dampen the romance in act two. Even less effective is Flaherty and Ahrens’ attempt to match the power of “Gonna Fly Now” and “Eye of the Tiger” with their own anthem of determination, “Keep on Standing,” which lacks the pulsating drive of those two hit songs.

The show’s Rocky is a bright spot in the production.  Andy Karl has been in and out of a lot of Broadway shows, often as a replacement. Unlike Stallone’s performance, there’s nothing sentimental about Karl’s Rocky, except the dialogue he’s been stuck with. He’s tough, resilient and displays a real macho edge, which isn’t always the easiest task for a boxer singing on stage in a big Broadway musical.

Spoiler alert: “Rocky” comes to life briefly at the end, not for the big fight but the placement of the boxing ring in the middle of the theater. It’s arresting to watch the Winter Garden’s first few rows of theatergoers efficiently exit the orchestra to take seats onstage so that a phalanx of stagehands can move the boxing ring over those orchestra seats to create a theater-in-the-round experience.

Had those ticket holders been warned ahead of time? Could the ushers move them into place on stage in time? Was their enough sportscaster blather to cover those many minutes of dead stage time? At last, after two lackluster hours, “Rocky” finally delivers suspense, excitement, drama!