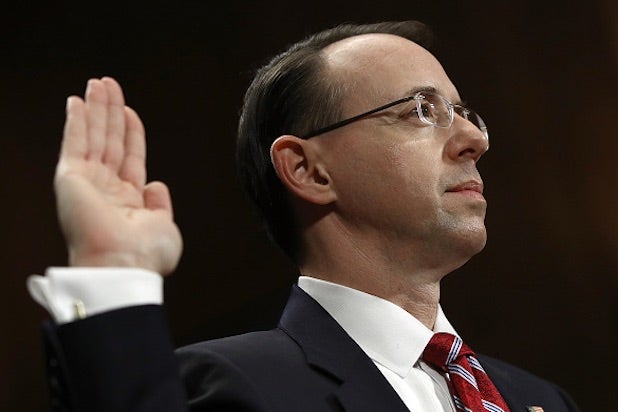 Deputy Attorney General Rod J. Rosenstein made the surprising announcement Wednesday that he has named former FBI chief Robert S. Mueller to investigate Russia’s role in the 2016 election — and what the department called “related matters.”

It was a surprise because Rosenstein, the second-highest ranking member of the Justice Department, said last week he would not name a special prosecutor.

The news came as President Donald Trump faces increasing scrutiny about his firing of FBI chief James Comey — who took over the job from Mueller in 2013 — and whether he fired Comey to end an investigation into possible collusion between Russia and his presidential campaign.

Here is the department’s full statement:

“In my capacity as acting Attorney General, I determined that it is in the public interest for me to exercise my authority and appoint a Special Counsel to assume responsibility for this matter,” said Deputy Attorney General Rosenstein. “My decision is not a finding that crimes have been committed or that any prosecution is warranted. I have made no such determination. What I have determined is that based upon the unique circumstances, the public interest requires me to place this investigation under the authority of a person who exercises a degree of independence from the normal chain of command.”

Deputy Attorney General Rosenstein added, “Each year, the career professionals of the U.S. Department of Justice conduct tens of thousands of criminal investigations and handle countless other matters without regard to partisan political considerations. I have great confidence in the independence and integrity of our people and our processes. Considering the unique circumstances of this matter, however, I determined that a Special Counsel is necessary in order for the American people to have full confidence in the outcome. Our nation is grounded on the rule of law, and the public must be assured that government officials administer the law fairly. Special Counsel Mueller will have all appropriate resources to conduct a thorough and complete investigation, and I am confident that he will follow the facts, apply the law and reach a just result.”

Special Counsel Mueller has agreed to resign from his private law firm in order to avoid any conflicts of interest with firm clients or attorneys.