Stars who attended Saturday night’s premiere of “Rogue One: A Star Wars Story” are weighing in on social media — and the consensus is that it’s out of this world.

Several blocks of Hollywood Boulevard were shut down — and an X-Wing fighter was parked on the street — to prepare for Saturday’s premiere at the Pantages Theatre.

Also Read: 'Rogue One: A Star Wars Story' Is Getting Into Your Uber

Comic Chris Hardwick went full-on fan boy after seeing the film, posting on Instagram: “Rogue One is a STUNNING film. I cannot recommend it enough. It’s dark, beautiful and satisfying. If you didn’t know Star Wars you’d love it, and knowing it makes it that much better. The references to things you recognize aren’t just member berries, they are justified and strengthen the story. Gareth Edwards has created an absolute gem in the Star Wars universe that will blow your brain out of your head. By the time the end credits hit, the theater was SCREAMING with unbridled excitement. See it as soon as you can before anything gets spoiled!!!” 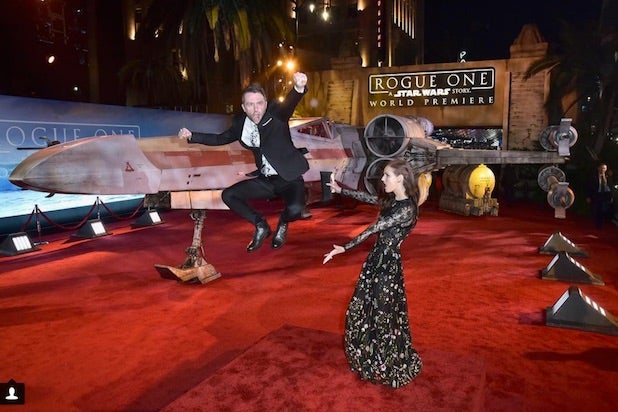 He even joked that he took a stack of the commemorative popcorn buckets people left on the floor, adding, “I’m not even ashamed.”

Holy craps @starwars #RogueOne was absolutely incredible. See it as soon as you can!!! Gareth Edwards I LOVE YOU. https://t.co/84ap5m3rwb

Set between the prequel and original trilogies, it follows Jones as Jyn Erso and her efforts to steal the plans for the Death Star, the ultimate weapon of the Galactic Empire, which has terrorized children everywhere since the first “Star Wars” in 1977.

Here are a handful of other celebs who couldn’t contain their excitement:

Wish Mrs Yen was there with me to share this very special moment tonight!😊✌️️👌 #Repost @sweetcil
・・・
What an… https://t.co/HqTkWuR73m

the science of a photo bomb by @BillNye at #RogueOne premiere last night with me and my wife @charissabarton1 pic.twitter.com/fKReavQTVW

Holy Sith! @RogueOneMovie is unbelievably wonderful! No lie: it is #EmpireStrikesBack great! An excellent chapter in the @starwars Universe! pic.twitter.com/Lb0vQ06ifh

I just saw Rouge One. I'm gonna say it.. this might be the BEST Star Wars movie!! I can't wait… https://t.co/CDs0CgmsnQ

#StarWars #RogueOne is AWESOME!! SO GREAT!! LOVED it even MORE than #TheForceAwakens!! Fans are going to LOSE THEIR SHIT!!!!!

It's so AMAZING how #StarWars #RogueOne ties into #ANewHope!! GREAT SURPRISES & many "HOW'D THEY DO THAT?" moments!! 100% FUN! Great ACTION!

"Star Wars" is not typically known for having much of a visual style -- the movies usually look good, but also pretty vanilla. "The Force Awakens" had a little bit of visual panache, but it was also very grounded in that traditional "Star Wars" look. "Rogue One: A Star Wars Story," though, is going all out in its own direction visually, and you can see that quite clearly in these shots from the new trailer that dropped Thursday night, including this one of Darth Vader.