There’s no doubt the new preview for “Rogue One: A Star Wars Story” lit the internet on fire. And now we have the numbers to prove it.

With all the news about “Rogue One” that dropped during Star Wars Celebration Europe late last week, the upcoming Lucasfilm movie has now surpassed Warner Bros.’ “Suicide Squad” in total volume of social media chatter, according to comScore’s PreAct measurement tool.

“Suicide Squad” held the top spot for two weeks in a row prior to “Rogue One” unseating the comic book anti-hero movie, which inspired 160,393 new conversations on social media last week (July 11–17). The “Squad” conversation count was at 112,572.

Also Read: Who's Who in 'Rogue One: A Star Wars Story' (Photos)

But when it comes to total number of conversations, the movie featuring Will Smith, Margot Robbie and Jared Leto remains the reigning champ at 1.6 million conversations. “Rogue One” has yet to crack a million with a total of 928,764 conversations so far.

But hey, the Lucasfilm movie has plenty of more time — 152 days to be exact — to keep fans buzzing, whereas “Suicide Squad” enters theaters in a mere 19 days.

Other titles that have people talking are Paramount’s “Star Trek Beyond,” out this weekend, and Universal’s “Jason Bourne” (see chart below).

Aside from new footage and a poster for “Rogue One,” factors that moved the needle last week include the fact that “Bourne” was in the news for multiple reasons: Matt Damon said he’d rather play that character than “misogynistic” James Bond; Lena Dunham publicly protested the guns in the movie’s posters; Damon said there may be a fifth “Bourne” movie; and a new teaser trailer and poster dropped on the 13th.

Here are three more things, according to comScore, that got people tweeting, sharing, and posting last week: 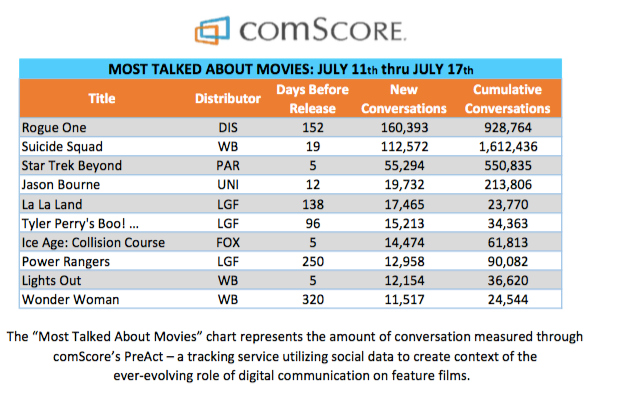 'Rogue One: A Star Wars Story': Everything We Know So Far (Photos)

We already have a pretty good look at the big picture, thanks in part to Friday’s presentation at Star Wars Celebration

As we bask in the glow of new footage for "Rogue One" from Star Wars Celebration Europe, it can be easy to lose track of the big picture. So let's take a step back and rundown the basics of what we know of the standalone flick from director Gareth Edwards.