With each, Roku is hoping to “provide fun, fresh and innovative twists on the reality dating format,” according to a press release.

“To Paris for Love: A Reality Rom Com” is actually a 90-minute unscripted feature film. It will follow three single friends who travel to Paris in search of true love. The logline reads: “From ‘meet cutes’ at the Luxembourg Gardens, to strolls down the tree-lined Champs-Élysées, will first dates lead to happily ever after or heartbreak?” 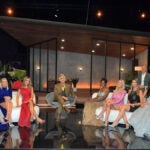 “The Marriage Pact” (wt) is described as “a social experiment.” It follows longtime single friends who must fulfill or break a pact previously made, promising to marry if both are still single by a certain age. According to the description, “Viewers will follow the participating couples, as their relationships are put to the test, to discover whether they are truly meant to say, ‘I do.'”

The series will feature eight hour-long episodes. It is produced by Maven, a Boat Rocker company.

Last but not least, Roku’s third series will explore the world of matchmaking in Miami. “Match Me in Miami” (wt) will also be an eight-episode season, following a matchmaking agency that challenges itself to get Miami’s most eligible singles coupled up in just a matter of weeks.

The series is produced by Lime Pictures, an All3Media company.

All three of the programs are expected to debut in 2023.