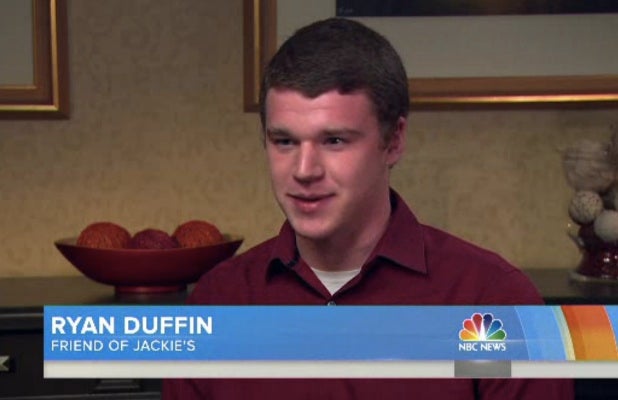 Two friends of the now infamous “Jackie” depicted in the erroneous Rolling Stone “A Rape on Campus” story appeared on “Today” Monday to say the whole debacle was avoidable.

“Yea, absolutely,” Ryan Duffin, friend of Jackie, told the “Today” show. “I was also wondering why there was a quote attributed to me that I had never given.”

Jackie had told Erdely that Duffin refused to speak with her, not wanting to get involved in the “shit show” she was running. Duffin adamantly refutes ever saying that, and claims he would have been happy to speak with Erdely.

Erdely never reached out to him—or two other friends of Jackie’s mentioned in the report—just taking Jackie’s word as to what Ryan had said and his lack of willingness to participate.

The journalism community has been left reeling from the scathing Columbia Journalism Review report released Sunday. The report found the magazine didn’t try hard enough to find and speak to the man Jackie alleged orchestrated her gang rape.

It also found Rolling Stone misattributed quotes to certain people they never spoke to first-hand, instead quoting students based off of what Jackie told Erdely her friends had said.

Social media response has been scathing as many wonder how nobody involved with the erroneous story will be fired.