This Friday the 13th won’t be just another day in a Swiss jail for Roman Polanski. By then the director will have sat behind bars, awaiting extradition to Los Angeles, for 48 full days — a significant figure for legal numerologists.

Not only is it a longer period of incarceration than Polanski spent in Chino State Prison for psychiatric observation in 1978, but, when added to those 42 days in Chino, it adds up to the magic number of 90.

That’s his proposed sentence reached under the plea deal 32 years ago.

“I would absolutely think,” says USC law professor Jean Rosenbluth, “that his attorney would ask for sentence credit — and it’s not unlikely that a judge would grant Polanski the time he’s already served in Switzerland.”

Rosenbluth, however, cautions against assuming there would be a day-for-day trade. 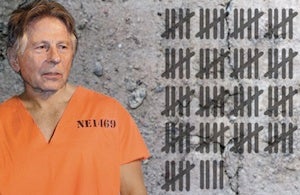 For one thing, she points out, Polanski fled the country in 1978 before the deal he’d struck with prosecutors was formalized as a sentence. For another, there are possible penalties arising from his flight.

“There probably would be some kind of global disposition,” Rosenbluth says, “an agreement that would take into consideration all the time he’s been confined. By the time his case comes up before the judge, Polanski will have spent some time in prison here, too, and that will be taken into account.”

So, while this Friday marks the 90th day Polanski will have been confined because of his 1977 sexual assault case, it probably won’t hurt for him to remain in Switzerland a little bit longer and earn some extra jail credits.

"In life,” Moix wrote, “we must choose between whims and ideas. … We would like to now sign a petition that Madame Emma Thompson never again sign a petition, because it would not be her signature that would be ridiculed, but this time the cause."

“Shame on Levy here before anyone else,” el-Khazen wrote, “as he insults the memory of the Holocaust by rendering it an excuse for an ugly rape whose details are appalling.”

And, on the right-hand margins of the debate, Breitbart’s Burt Prelutsky’s attack on “Hollywood Elitists Through the Ages” continues a recurring theme of linking Polanski (and the National Endowment for the Arts!) to Holocaust figures.

“Just recently,” Prelutsky complained, “we got to watch a swarm of Hollywood retards climbing all over themselves in a rush to defend Roman Polanski, a piece of Euro-trash who confessed to having sex with a 13-year-old child.”

We can only imagine the commentary once Polanski is back in town.