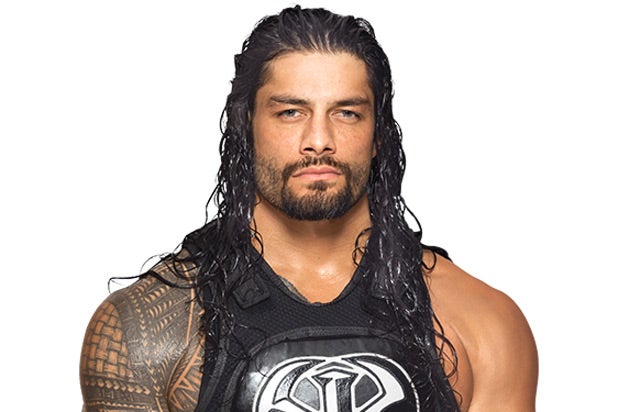 Roman Reigns was suspended Tuesday for violating the WWE’s wellness policy — and while the 30-day math allows for it, the superstar may still not participate in the next big Pay-Per-View.

Real name Joe Anoa`i, the wrestler will take his medicine for one month as this incident was just a first offense, but that still places the current “WWE Battleground” main event in a bit of jeopardy — or at least, some controversy.

Reigns is technically suspended from June 20 to July 20, meaning he is eligible to return to action on July 21. “Battleground” is set for Sunday, July 24, when Reigns was meant to scrap with both ex-Shield teammates Seth Rollins and Dean Ambrose in a Triple Threat match for the coveted WWE World Heavyweight Championship.

However, TheWrap has learned that WWE will weigh all creative options surrounding the booking. Though we received no further detail from our source, that clearly means the three-way fight could go on as planned, or it might get changed over the next few weeks.

Perhaps it’ll simply end up as a straight Rollins-Ambrose one-on-one. After all, if Reigns can’t wrestle, he can’t promote the product between now and then. Plus, it might just be bad public relations optics if he did.

That said, Reigns was handpicked to be the next face of the company by owner Vince McMahon, who has a clear affinity for the former pro football player. Unfortunately for Reigns, despite being a three-time WWE World Heavyweight Champion, a loud faction of fans don’t share McMahon’s love, and he’s been booed loudly at live events for months now.

Ambrose currently owns the company’s top belt, which was held at one point or another by all three former friends on Sunday evening. Reigns began the weekend’s pay-per-view as champ, before losing it to the returned Seth Rollins, who actually had to forfeit the same title last year due to injury. Immediately after their match, Ambrose “cashed in” his newly won title-shot contract, beating Rollins and take the strap. To get that guarantee, Ambrose won a “Money in the Bank” ladder match earlier the same evening.

Last night, on USA Network’s “Monday Night Raw,” Reigns and Rollins headlined with a No. 1 contender’s match. A double count-out meant there was no winner, which is how the Triple Threat came about.

The WWE did not immediately respond to TheWrap’s request for clarification on when the company first found out about the Reigns violation.