Roman Polanski has another highly visible backer among the film community at Cannes: French director Xavier Beauvois, who made his support of Polanski clear with the T-shirt he displayed during a photo call for his Cannes film “Des Hommes et Des Dieux” (“Of Gods and Men”).

According to the Associated Press, Beauvois told reporters that the new allegations of unspecified abuse from actress Charlotte Lewis were “ridiculous.” He has called Polanski’s situation “Kafkaesque.” 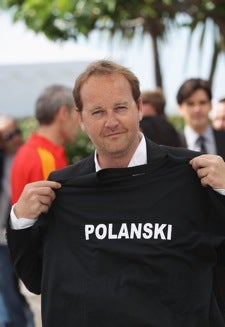 Earlier, Beauvois was one of the directors who signed a letter expressing support of Polanski and asking the Swiss government to refuse an extradition request from the U.S. prosecutors.

Beauvois’ new film, which stars Lambert Wilson and Michael Lonsdale, is a drama about a group of French monks in North Africa who are confronted by Muslim fundamentalists. Todd McCarthy of indieWIRE gave the film a grade of B.  Reuters called the film “somber and reflective.”

In 1995, Beauvois won the Cannes Jury Prize for his film “N’oublie pas que tu vas mourir.” He was also nominated for numerous European awards for his 2006 film “Le petit lieutenant.”

Woody Allen is among the Cannes attendees who have expressed support for Polanski, who is currently under house arrest in Switzerland.  Michael Douglas, on the other hand, told a French radio interviewer that it would not be fair to sign a petition for "somebody who did break the law."