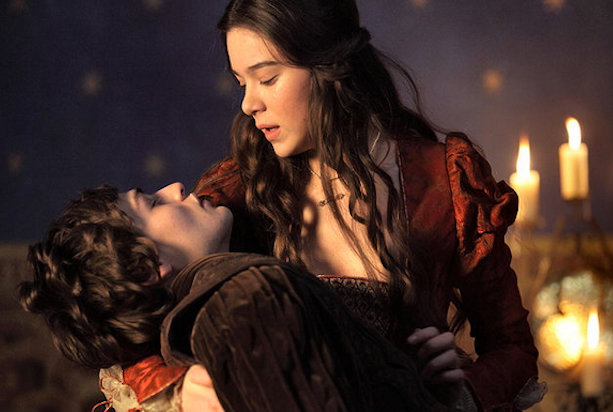 As the first English language adaptation of Shakespeare’s iconic play since 2000’s “Romeo Must Die,” and the first to offer a straightforward take since Zeffirelli’s 1968 version, Carlo Carlei’s “Romeo and Juliet” is a sobering reminder that impetuous and hormonally charged teenagers were a thing long before they started trading photos of their genitals with Snapchat.

Adapted with unironic earnestness by Julian Fellowes (“Downton Abbey”), this new version stars Douglas Booth (“LOL”) and Hailee Steinfeld (“True Grit”) as the star-crossed lovers, whose doomed romance seems more a byproduct of adolescent impatience than the enduring allure of true love. Elegant and well-acted but bereft of the spark to make its tragedy resonate with lovers who spent more than an hour getting to know one another, “Romeo and Juliet” offers an adaptation of Shakespeare’s classic stage play that effectively chronicles young love but doesn’t transcend it.

Set in Verona, where a fierce rivalry rages between the houses of Montague (Tomas Arana) and Capulet (Damian Lewis), Romeo and Juliet meet by chance at a party and immediately fall head over heels in love. Hoping that their union will end the feud between their families, Romeo’s friend and mentor Friar Lawrence (Paul Giamatti) agrees to marry the couple in secret, but their celebration is short-lived when Juliet’s cousin Tybalt (Ed Westwick) kills Romeo’s friend Mercutio (Christian Cooke).

With the Montagues and Capulets more fiercely divided than ever, Juliet solicits Lawrence’s help to reunite once more with Romeo, who awaits word from her after being exiled for retaliating for Mercutio’s murder.

In stark contrast to other versions of this story that condensed Shakespeare’s florid language into digestible bites, Fellowes shows admirable commitment to the source material and yet is remarkably successful at making it feel accessible. Carlei pairs it with imagery that feels suitably theatrical – sweeping curls of dust precede the arrival of Tybalt as he arrives to challenge Romeo – and then guides the actors to find the emotion behind the words.

But it’s veterans like Lewis and Giamatti who really make the material come alive. Lewis’ disbelief at his daughter’s refusal to marry another suitor, for example, is a thing of comic beauty that unexpectedly gives way to shocking parental rage, but he modulates the character’s headstrong authority to make him understandable, even sympathetic.

Giamatti, on the other hand, provides a voice of reason, rolling his eyes at Romeo and Juliet’s melodramatic ups and downs while still offering shrewd, compassionate assistance to their plight. Meanwhile, Booth and Steinfeld are believable as the naïve lovers, but as a smolderer cut from the cloth of hunks like Robert Pattinson, Booth plays a more convincing heartthrob than troubled suitor. And  paired with Steinfeld’s thoughtful anguish, somehow they feel together less like soul mates than triggers for one another’s sexual stirrings.

Ultimately handled with sensitivity, handsome period detail and loyalty to the original text, Carlei’s “Romeo and Juliet” earns its place among the most authentic film adaptations of Shakespeare’s play. But at the same time an oddly contemporary story of two teenagers whose physical attraction for one another supersedes their better judgment, it fails to truly capture the timelessness of their romantic thrall, which is why its ending may seem like less of a profound tragedy to audiences than, like, a real bummer, man.