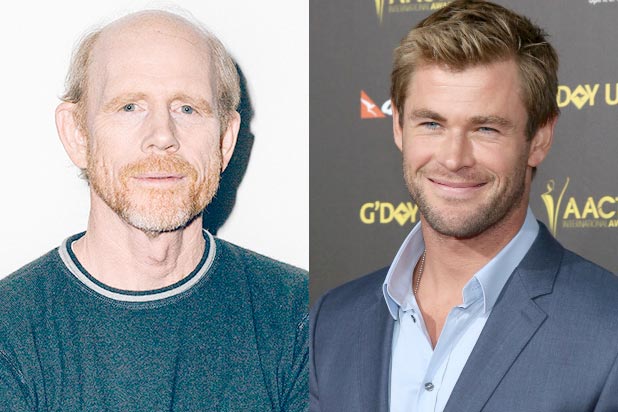 Ron Howard has wanted to go sailing for a while.

In the ’80s, he flirted with directing a film called “Rainbow Warrior,” based on a real event in which the Greenpeace ship of the same name was hijacked. In the ’90s, he was in talks to make an adaptation of the Jack London novel “Sea Wolf.” Both projects eventually fell through.

But “In the Heart of the Sea,” which opened Friday, is “the culmination of a long wish to do an adventure story at seas,” the director said. The movie, based on the book by Nathaniel Philbrick about the true story that inspired “Moby Dick,” stars Chris Hemsworth, with whom Howard worked on 2013’s “Rush.”

Howard spoke to TheWrap about reuniting with Hemsworth and the road to the film’s release.

What drew you to “In the Heart of the Sea”?
Chris Hemsworth brought it to me. I had a fantastic experience working with him on “Rush.” It fulfilled everything I liked about the other projects [“Rainbow Warrior” and “Sea Wolf”] in terms of exposing characters, testing them in that environment. But it had this other cinematic component, which was this whale that needed to exist on screen in an authentic way.

This is one of those scripts that has been around for more than a decade. It’s come close to being made a number of times and always halted because of the cost and often because the casting didn’t make sense. Here with Chris is a rising, proven star, who is really the right guy to play Owen Chase.

What besides the fact that he came bearing this project made you want to work with Chris Hemsworth again?
I loved working with him on “Rush.” I felt like as an actor, as an artist, this was another good step for him, a good showcase, in a way, for the kind of range that he can offer. Plus, he has a kind of work ethic and attitude, not unlike my buddy Tom Hanks, for example, that makes him the right sort of person to go to sea with, to get into an adventure like this.

It’s also great that a studio like Warner Bros. is behind it. It’s not a straight-ahead, full-on escapist movie. Yet it’s a really compelling, powerful, entertaining adventure story. But it doesn’t fit into a formula, and I have a lot of respect for Warner’s willingness to make it and the support they’ve shown me throughout.

The release date of the movie was pushed at one point. When that happens, is it frustrating or do you just chalk it up as part of the business?
I was a big proponent of that. We weren’t the architects of it, but Brian Grazer and myself and Paula Weinstein who are the producers of it always felt like the movie belonged in the fourth quarter. Tonally it’s a time when the movie marketplace broadens. There’s an appetite for a wider range of movies. They screened it. It tested very well. They realized they didn’t have a Christmas movie, and they believed in us for that slot. On top of that, they then said, “Well, since we’re gonna have that time, would you consider a 3D conversion?” I hadn’t worked in 3D at all, and I was really excited about what that brought to the movie.

What were the biggest challenges of doing the 3D conversion?
For me it’s just a complete education. Certainly there are some modifications, not editorial, but just in terms of some decisions you need to make, about depth and focus. We were all kind of blown away by just how advanced that technology is now and just how effective it was as it related to “In the Heart of the Sea.”