Ron Masak, a prolific character actor best known to television audiences as Sheriff Mort Metzger on “Murder, She Wrote,” died Thursday of natural causes, his family announced. He was 86.

Born in Chicago in 1936, Masak began his entertainment career while serving in the U.S. Army before moving to Los Angeles. He made his screen debut on an episode of “The Twilight Zone” in 1960. He went on to appear in numerous notable productions of the era, including “The Monkees,” “Ice Station Zebra,” “Bewitched,” and “The Flying Nun,” among others. 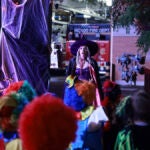 He worked consistently during the 1970s and ’80s, racking up appearances on shows like “Diff’rent Strokes” and “Quincy, M.E.” But it was his regular recurring role on “Murder, She Wrote,” as Sheriff Metzger that Masak was most familiar to audiences. He first appeared in the role during the show’s fifth season, in 1988, and played Metzger a total of 41 times before the show ended.

He was also known as the “king of commercials” for his frequent work in advertising, most notably voicing the Groucho Marx-inspired stork in the Vlasic pickles ads for 15 years.

He’s survived by his wife of 62 years, Kay, and their children and grandchildren.