Rosario Dawson is willing to risk anything to find her son in the first trailer for HBO Max’s “DMZ.”

The four-part limited series, based on the DC graphic novel of the same name, tells the story of a near future where America is embroiled in a bitter civil war, leaving Manhattan a demilitarized zone — hence the title of the series. The show chronicles the journey of fierce medic Alma Ortega (Dawson), who saves lives while desperately searching for her lost son.

In the trailer released on Monday — which you can watch above — Dawson’s Alma explains that she and her son were split apart during the evacuation out of Manhattan before it became a demilitarized zone. Even though the city is now an active war zone, she decides she must go back in search of him.

She contends with the gangs, militias, demagogues and warlords that control this lawless no man’s land, and eventually becomes an unlikely source of hope. As the trailer comes to a close, she is warned that she is “stepping into stratospheres of consequences” if she continues down the path she’s on. 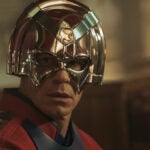 The series is executive produced by Roberto Patino, Ava DuVernay, and ARRAY Filmworks’ Paul Garnes. Patino created the series for television based on the DC comic books written by Brian Wood and illustrated by Riccardo Burchielli.

Patino also serves as showrunner and wrote the first episode, which was directed by DuVernay. Three other episodes were directed and executive produced by Ernest Dickerson. Carly Wray is a co-executive producer.

“DMZ” is produced by DuVernay’s ARRAY Filmworks in association with Warner Bros. Television. The series debuts on HBO Max on March 17.