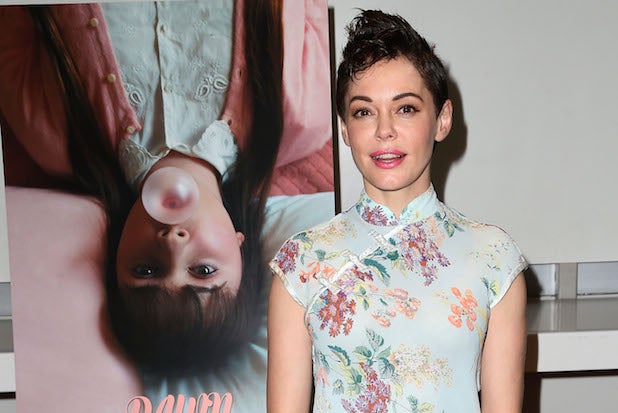 For some, appearing on the cover of Rolling Stone is a career pinnacle, a childhood fantasy attained. For Rose McGowan, a suggestive pose on a 2007 issue of the iconic magazine was a wakeup call.

“I just had this bouffant hairdo, this big bubble hairdo, this weird Photoshopped forehead that they gave me — I don’t know why exactly, because my forehead was fine, last I checked — and this dark fake tan, and I’m chest-to-chest with Rosario Dawson and an ammo belt around my hip was the only clothing I had on,” McGowan remembered in a conversation with TheWrap on Monday. “And I was like, Who is that?“

The trouble wasn’t so much just that those specific photographers and designers at that specific magazine had put them in a less-than-comfortable pose (to promote “Grindhouse”), but that the cover represented everything that she had come to hate about her career and industry.

“It’s always part and parcel of it, you’re expected as a woman, this is what you trade off of, this is how you sell tickets to the movies, this is your part of it,” she rattled off, regretting the state of the business. “Your job as a promoter is this: They’re not sticking a guy on the cover doing it, unless it’s like Seth Rogen doing a joke. So as a woman I’m expected to sell myself, my body, my image, my sexuality, in order to get your ticket sales up. It’s kind of fucked up. And it’s like, wait, I wasn’t aware that when I signed on to act, I had to sell myself that much.”

And so McGowan retreated from Hollywood, more or less, taking time to travel and study and appearing in fewer projects (most notably an arc in “Nip/Tuck” and a supporting role in “Conan the Barbarian” in 2009). During this time, she says, she found both her true self and her true passion, which together led to her directorial debut on the short film “Dawn.”

A 1961-set story about a teenage girl lured into danger by older kids with bright smiles and dark intentions, “Dawn” is a lush, impressive debut, and one that McGowan says will launch the next phase of her career.

See videos: Sundance Video: Rose McGowan on the ‘Softness’ of American Male Actors – ‘That’s Why We Import Them’

TheWrap: You’ve been in the industry for most of your life, so when did you decide that you wanted to direct?
McGowan: I think it just actually came out of the writers, who are my friends, it came from an outside source, instead of an internal source, and then it all just clicked. And all my years of frustration, I was like oh, I can actually do something about this.

It seems like we’re in both a permission-based industry, and also the sense that you can go do it yourself because things aren’t as expensive to make. There’s a weird split there.
McGowan: There is a big schism in this industry; if you’re on the actor’s side, it’s like, here is what you’re allowed to do, or what we’re gonna let you do, and maybe you’ll get this, and maybe you won’t. Where the other side of this is just, go be a maverick and just do it yourself, which as it turns out, is more in line with my process.

How long did it take you to shoot?
McGowan: It was a four-day shoot, but pro-rated, if it was a full feature, it probably would have been about 30. Budget-wise, it was a big undertaking. We had water tankers on set, it had to go with us through the forest when we were driving… It was pretty intensive, but I handled things very well. I always have, I’ve just never really gotten the credit for it.

I read that this story was loosely based on your mother, in some way? Why did you connect with the story?
McGowan: I connected with it because of my mother, it wasn’t loosely based on her. It was a study of those kind of themes, obviously anything story-wise, no, but the maternal influence was very much there.

The struggle of women throughout the ages have been legend. And they still go on. “Dawn,” set in 1961, has a lot of parallels to today. It’s a little more subtle now, but [sexism] is still endemic in the world and in our culture.

This summer, it seems to come to light more than ever, maybe it’s finally just being exposed a little bit, even with the NFL, what’s happening there.
McGowan: Exactly, and it’s like, Jesus, really? It’s taken this much time? But at least it’s getting there. But like, really? It just gets so boring. That part for me is that it just gets so boring. All of these like, it’s the same treatment of women throughout the ages, we haven’t moved on yet, people?

Does it seem like we’re having this conversation more this summer?
McGowan: For me, if I was going to think about it, I would say that it’s probably something akin to people feeling like we’ve moved on, we’re now a more civilized society, but it’s just a veneer. The true problems are all still there. You don’t discuss them. You don’t discuss the fact that violence against women is so huge in this problem. All those gun statistics deaths, besides for inner-cities, it’s women, that’s who’s getting killed. I was in Colorado doing a movie and every day in the newspaper, it was like, “Woman gets killed by her ex-husband, ex-boyfriend, etc.” and you’re like ugh.

And imagine what a good old boys [club] the NFL must be. What a nightmare. I thank god I’m not a football player every day.

At least they’re finally feeling some heat.
McGowan: At least they finally are. And they’ll feeling heat from people who are thinking, progressive males, which is heartening.

I’m always torn because making the topic of an interview that someone is a woman director is putting an asterisk on the work they’ve made, you must be sick of it.
McGowan: It’s just like female comedians. It’s a gender-neutral position. It makes me a little bit crazy.

But at the same time, the numbers are pretty terrible, so if you don’t talk about it…
McGowan: Oh, they’re horrifying. Believe me, the NFL might have nothing on us.

So do you get annoyed by those questions? Do you feel they’re annoying but essential?
McGowan: It’s really tricky, because it sets you up in a way that, as a woman answering it, you’re bound and you have duct tape across your mouth, and if you say something, it’s like, you’re just another woman harping on… but it’s like no, it’s just reality. I’m not a woman harping on anything. It’s just a fact. I wish it weren’t a fact. I would love to never talk about that again, wouldn’t that be exciting, wouldn’t it be exciting just to talk about work? How great would that be? So freeing, because that’s what it’s about.

The last I heard, the sex I was born didn’t really come into play with what I’m doing, other than to other people. I didn’t check with myself that morning and say, as a woman director, I wonder how I’m going to approach this scene? Do you know how silly that sounds?

But the statistics are so grim, and so I’m going to do something about that. And I think it’s time.

Also read: Amy Berg on Her Narrative Debut and Working With Women: ‘The Female Vision Is Very Unique’

Do you have plans to direct a feature? Is that the next thing in your career?
McGowan: Yeah, absolutely. I’m in negotiations for two right now. One’s a big one, and one is a more indie one. This is what I love, I’ve finally really, really, really found my passion, more than anything.

So people see the short and say oh wow, we have to take her seriously as a director now!
McGowan: Basically yes. As an actor, you’re not taken seriously because you’re given the roles you’re “allowed” to be given, and you’re trying to make a living, you’re trying to survive and you’re trying to do this so you take the best of what is out there. In my case, it was a bit of a Jessica Rabbit case in the past, where it’s like, “I’m not that, I’m just drawn this way,” where my brain is very different. But because of what I look like, I got stuck doing a lot of certain things that didn’t necessarily go in line with how I think.

Do you think that now that you’ve entered this new phase, can you find acting roles that are more suited to your thought process and personality?
McGowan: Absolutely. I literally just signed on to two movies to act in and again, I think it’s what you put out in the universe maybe to an extent is what you get back. Things rise up to meet you. The two movies that I’m in negotiations to act in are very very different than anything I’ve really done before. Just not trading on any physical aspect of anything. One is a goofy trio of people that hunts for ghosts, so it’s kind of idiots, basically. A trio of idiots. And that’s a comedy. And one is just a psychological drama about this woman and her husband whose life gets torn about by someone having false memories or maybe real memories of the husband committing a crime. So their life just gets dismantles. It’s cool, it’s stuff with some meat on it.