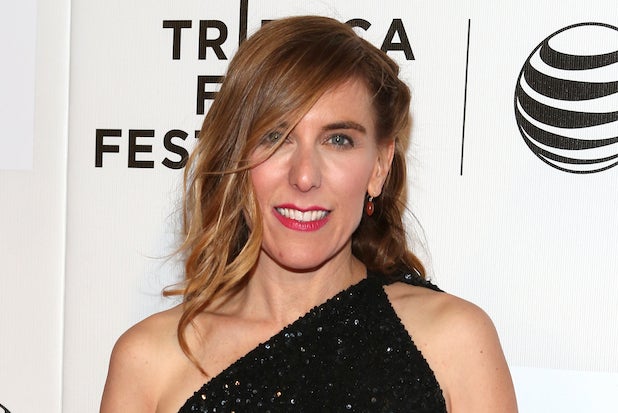 Amy Berg has made her name by penetrating acts of evil and injustice in documentaries. Now, she’s exploring good and evil in her first narrative film, “Every Secret Thing.”

Her first film, 2006’s “Deliver Us From Evil,” dived into the culture of sexual abuse and cover-ups in the Catholic Church, and she was rewarded with an Oscar nomination for it. Her next film, “West of Memphis,” was even more high profile, as it explored the tragic case of the West Memphis Three, who were wrongfully convicted of murder and imprisoned for nearly two decades.

In “Every Secret Thing,” Berg goes to work on a fictional story that plays with similar themes.

Based on the Laura Lippman novel of the same name, and adapted for the screen by Nicole Holofcener, the film concerns two 11-year-old girls who are sent to jail for the murder of a young baby. When they get out seven years later, they’re played by Danielle Macdonald and Dakota Fanning, and trouble finds them once again — as does Elizabeth Banks, the police officer who put them away in the first place.

Also read: Amy Berg on Her Hollywood Sex Ring Documentary: ‘It’s Bigger Than the One Case’

The film bounces between past and present to reveal important facts and secrets about the original case, the girls’ time in prison and their new home lives; Diane Lane plays Macdonald’s emotionally distant mother. It is a dark and moody exploration of flawed women and small-town injustice, and Berg spoke to TheWrap this week about how her time as a documentary filmmaker helped with this movie’ s production.

TheWrap: This isn’t a documentary, or improv either. It’s very scripted. How did you adjust from following a story wherever it goes to working off a script?
Berg: It was very scripted, but like in a documentary, I had the opportunity to work with the actors quite a bit before we started shooting, and we really fleshed out what every character was — what their backstory and intention was in every moment. So when we were on set, we did have a lot of great, kind of extemporaneous moments where we got to play around with things. It had a very specific look, but I feel like we were going for the truth, and we wanted to really find that in every scene… But the great thing about going from documentary to feature is the resources. It’s just such a difference.

How did doing docs help make a narrative that jumps around from the past to the present so often?
In documentaries, sometimes you have a little more room with non-linear timelines, because it’s more about thematics and storytelling. This had a lot of past and future, and it was really tricky on set, because we had a really tight schedule. We were shooting sometimes eight scenes a day, generally about five, and we had to go from a present scene to the past. And that’s a shift in what characters know.

How did you decide when to reveal the info to the audience? Because that determines the entire tone of the movie.
I knew that was going to be a challenge before we even started shooting, so I was trying to be mindful of giving myself options, for moving things around in the edit bay. It really did come together in the edit bay, but there are certain things that make that challenging, like how much you want people to think Alice is involved versus Ronnie because of their appearance and the way we stereotype people — it’s very tricky.

You can change when people know different things, but in a doc there’s a lot of exposition, but in a narrative you want to do more showing than telling.
Yeah, because the truth is Nicole is so great at dialogue and great scenes between actors. When you’re doing a thriller, you want to be less reliant on too much information, so we definitely had to find a way to find a “show not tell.” And I think that between my creative team, with my DP and production designer and costumes, we really kind of created something that invited you in.

Also read: Jack O’Connell on ‘Starred Up’ and His Troubled Past: ‘I Really Had To Dig Deep to Get a Second Chance’

What did you want to make sure you showed?
The past, for sure. That was something, and it’s tricky because you have young actors who have not done that many films and they don’t understand the adult issues, obviously, so you’re trying to get them into an environment and deal with something that’s heavy — murder. So that was definitely something I wanted to show more than tell, but we found those moments where it really worked to hear what they were saying. There were a lot of moments where it was just an image in the distance.

From you and Nicole Holofcener, to the producers and cast, it’s an awesome team of women.
The female vision is very unique, I feel, and we’re starting to see really interesting characters coming from female writers and directors. This has so many great parts from the cast to the crew and I was so attracted to it for that reason, too. Just strong women.

What do you take from doing a narrative that you can apply to docs?
I feel like they can work well with each other. I’m working on another narrative now. I feel like it just gave me access to, “what else can be done?” I definitely want to be able to have a bigger crew. Sometimes it isn’t worth it, sometimes it is. It’s just another great lesson in life for me, another great storytelling lesson.

What narrative are you working on now?
I’m working on something on Jonestown.

Oh, so another light subject.
Really light, it’s another romantic comedy. Just don’t drink the kool-aid and everything will be great. There hasn’t been a narrative about Jonestown. I’m gonna write that myself. I just started it. It’s a good way to direct for me, get more involved.