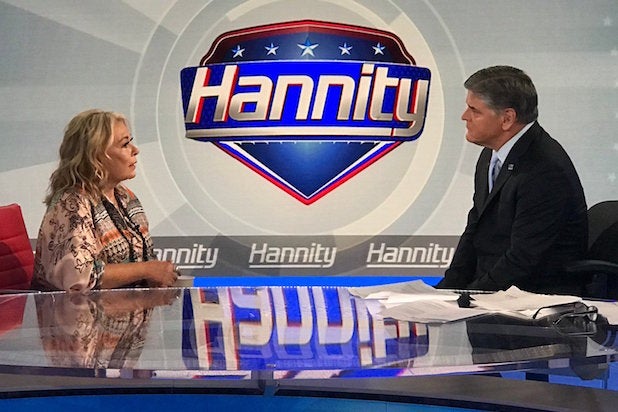 Speaking to Sean Hannity Thursday night, Roseanne Barr looked into the camera to address former Obama adviser Valerie Jarrett directly. “I’m so sorry that you thought I was racist, and that you thought that my tweet was racist,” Barr told the woman she once compared to “Planet of the Apes.”

Barr was referring to her May 29 tweet that Jarrett was “muslim brotherhood & planet of the apes had a baby.” But, she said Thursday that tweet “wasn’t racist, it was political. I’m so sorry that you feel harmed and hurt, I never meant that and for that I apologize.”

Barr’s appearance on Fox News’ “Hannity,” her first television interview since being fired by ABC, was marked by Hannity’s continuing attempts to get Barr to directly address Jarrett on air — and to directly apologize to her. Multiple times Hannity prompted Barr with this hypothetical: “If I had her number and I handed the phone to you right now, what is the first thing you’d say to her?”

“I never meant to hurt anybody or say anything negative about an entire race of people, which I think 30 years of my work can attest to,” Barr said after she addressed Jarrett directly.

Hannity played the reasonable intermediary throughout the interview, particularly after that haircut jab, when he commented that “people say that about me all the time” to try to laugh it off.

Barr was fired and her ABC sitcom “Roseanne” canceled in May, after she tweeted “muslim brotherhood & planet of the apes had a baby=vj,” about former President Barack Obama adviser Valerie Jarrett. That same morning, Barr also accused Democratic donor George Soros, a holocaust survivor, of complicity in the Holocaust.

She later apologized for both remarks, though on July 20 she defended her comments about Jarrett, saying in a YouTube clip that “I thought the bitch was white.”

Barr made an odd comment to Hannity about her firing, seemingly indicating that she thought ABC had violated the terms of her contract in some way.

“I walked away from that show despite the fact that I had a contract which protected me from if I got in trouble with tweets,” Barr said.

“I was allowed under my contract to have 24 hours to correct any mistake and I asked them to let me go on ‘The View’ and their other shows and explain and correct that I didn’t say what they were putting out there and, you know, they said, ‘no, you can’t until the contract is ready,’ and that took weeks.”

Barr said that instead of trying to fight ABC on that point, she decided to accept her termination as part of her “repentance.”

ABC did not immediately respond to a request from TheWrap for comment.