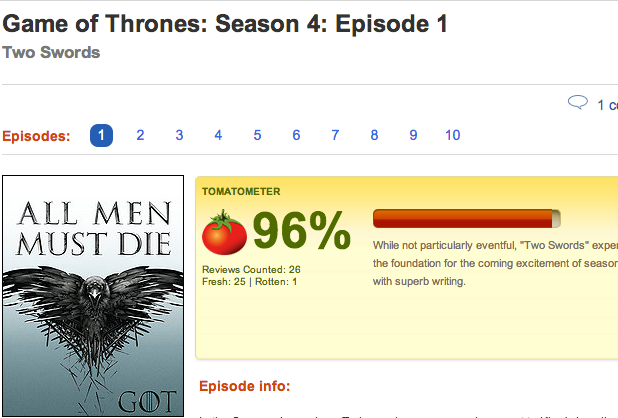 Rotten Tomatoes will provide its “Tomatometer” ratings for every new episode of “Game of Thrones,” the first time the popular review aggregator has done that for any TV show.

The goal is to generate excitement for the site’s TV ratings section, which Rotten Tomatoes — best known for rating movies — launched last fall. The project remains in beta.

“Episode level ratings will bring a whole new level of engagement from our Rotten Tomatoes fans,” Rotten Tomatoes editor-in-chief Matt Atchity said in a statement. “Since it’s avidly followed by its audience, ‘Game of Thrones’ is the perfect series to invite our users to check in even more frequently – and find out what the critics and other users are saying.”

Critics contributing to the episode reviews hail from newspapers, magazines and websites.

Few shows generate as much excitement as “Game of Thrones,” which is based on George R. R. Martin‘s novels. The premiere episode, “Two Swords,” has been one of the most popular subjects across social media for the past 24 hours, with HBO earning its highest ratings since “The Sopranos” finale.

Rotten Tomatoes will provide episode-specific rankings for episodes of other shows with similarly rabid fan bases, though RT is currently keeping those details close to the vest.