So 15 films have made the shortlist in the quest for the visual-effects Oscar.

From "Angels and Demons" to "Where the Wild Things Are," it’s a varied list, with big hits ("Transformers: Revenge of the Fallen," "Star Trek"), less successful action flicks ("G-Force," "G.I. Joe: The Rise of Cobra") and a couple of animated films "("Coraline," "Disney’s A Christmas Carol").

But getting onto the shortlist is only the first of four steps in one of the more complicated Oscar processes — and this year, that process is almost certainly a doomed quest for everything except "Avatar." 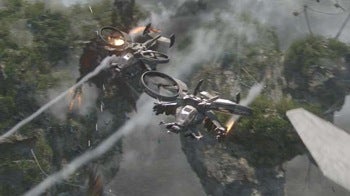 The 15 films were chosen (out of the entire field of 274, most of which obviously didn’t merit consideration) by an executive committee drawn from the Academy’s visual effects branch, which somewhat curiously omitted "The Lovely Bones."

That film not only uses considerable (and crucial) computer-generated effects, but it also comes from director Peter Jackson, whose "Lord of the Rings" movies once monopolized this category.

From here, the semi-finalists will undergo additional scrutiny at the hands of the same executive committee, who will narrow the field to seven.  Goodbye, "G-Force" and "Angels and Demons" … I suspect.

And then comes one of the liveliest Oscar traditions, the "bakeoff."

It’ll take place in late January, a week or two before the nominations are announced.  Each of the seven shortlisted films will create a reel, no longer than 15 minutes, of impressive scenes from the film.  The potential visual effects nominees will be allowed to briefly introduce the reel, and after it runs to take questions from the audience.

I attended the visual effects bakeoff five years ago, and found that the sales pitch could work wonders in transforming a contender into a nominee. The effects artists on "Master and Commander: The Far Side of the World," for instance, did an exceptionally good job of conveying just how difficult it was to convincingly render computer-generated water; at the end of the night, the assembled branch members voted by secret ballot and gave that film a nod over what seemed to be likelier nominees, like "Terminator 3."

(The interesting thing about the "T-3" presentation, actually, was that the movie itself lost virtually nothing in its transition from a two-hour film to a 15-minute special-effects reel.)

A few minutes before that bakeoff began, I was standing in the aisle when one branch member turned to another. "Why don’t they just give ‘Lord of the Rings’ a special achievement award, and everybody else can go home?" he asked with a laugh, speaking of the film that would indeed win the Oscar.

And at this year’s bakeoff, I suspect that the exact same question can be asked of James Cameron’s "Avatar," which by all reports takes visual effects to a whole new level.

In other words, this may be a category (like animated feature?) where everybody else is playing for second place.