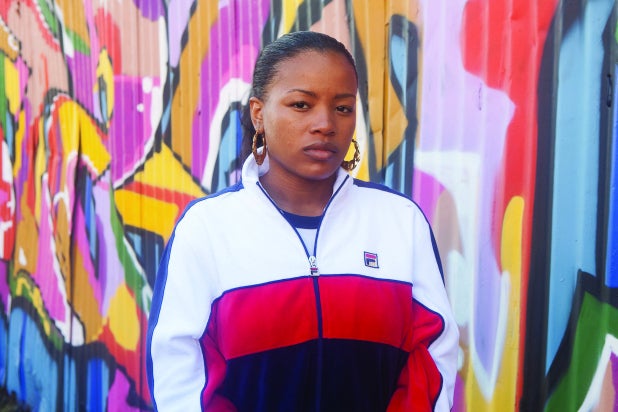 Though she stars opposite the wildly talented Oscar winner Mahershala Ali, newcomer Chanté Adams steals the show as the titular character in the hip-hop biopic “Roxanne Roxanne.” Writer-director Michael Larnell (“Cronies”), aided by producers Forest Whitaker and Pharrell Williams, tells a powerful true story of a spirited girl who must contend with a hard life of poverty, absent parents, assault and spousal abuse.

Set mostly in the 1980s, this engaging story focuses on a decade in the life of rapper Roxanne Shanté (Adams). A girl from the projects in Queens, she went from shoplifting to provide for her family to a glamorous hip-hop career.

But hers is not a household name. In fact, her name is itself part of an evolutionary process. Originally born Lolita Shanté Gooden, she evolved into a rap star going by the name of Roxanne Shanté, facing a host of struggles in each incarnation. Through it all, everyone knew her as Shanté. The hardships she endured called on vast reserves of inner strength.

Adams nimbly plays Shanté, a tough but vulnerable young woman who rises to stardom while still wearing braces on her teeth. She gets hurt and used but never comes off like a victim. Adams captures her swagger as well as her softness; it’s a terrific breakout performance by the recent Carnegie Mellon graduate, who raps as well as a hip-hop star and embodies the role indelibly.

A rap beat infuses some of Shanté’s dialogue and especially her clashes with local kids, making for some much-needed comic relief in a story filled with hard luck and sadness. The first time we see her, in 1978, she’s a ‘tween embarking on her first rap battle, angling to win the cash prize.

The young Shanté (Taliya Whitaker, Netflix’s “She’s Gotta Have It”) asks her mom Peggy (Nia Long) if she’s allowed to curse. “I don’t care what you do as long as you get that 50 dollars,” her mother tells her. The film cleverly cuts away just before her battle with a much older guy begins, leaving us wondering just how good this young girl is. We find out soon enough.

Long’s portrayal of Peggy is beautifully layered: She plays a weary mother of four girls, beaten down by misfortune, who alternates between ebullient warmth, practical tough-love and bitter resentment. When a boyfriend (Zurich Buchner) steals her life savings, Peggy attempts to teach her girls never to trust men. Shanté ignores her advice and learns lessons on her own.

Initially, Shanté helps raise her beloved younger sisters, clashes with her hard-drinking mom and copes with false promises and abandonment by her father. Her turning point happens when she’s 14. We see her walking to school with her best friend, chattering about the latest Sergio Valente jeans. Then, after school she steals what she can from neighborhood stores, paid off by older neighborhood guys.

She seems headed for a life of crime, but before she’s caught, her street hustling days come to a halt. Walking to the laundromat, Shanté is egged on by an aspiring music producer neighbor. He convinces her to record a rap. That song — “Roxanne’s Revenge,” an improvised takedown of a UTFO track — shoots up the radio charts, and an instant hip-hop sensation is born.

We see her sporting flashy furs and riding in limousines. A promoter gives her a Mercedes. By the time she’s 16, she’s sharing a house with the much-older Cross (Ali) and has a young son. Ali is excellent as Cross, a slick charmer prone to nasty bouts of violence. He attempts to defend himself with the line: “I hit you because I love you.” Then, in typical abuser fashion, he tries to make it up to her with a flashy gift.

After a beating from Cross lands her in the hospital, she fights for custody of their young son. Shanté is aided by a sleazeball lawyer (a cameo by the Beastie Boys’ Adam Horovitz), who opens up negotiations with the words “You people…” Larnell artfully conveys Shanté and Cross’s relationship with a visually indelible montage of shots, including a powerful trio of painful experiences: Shanté’s loss of virginity, giving birth, and being brutalized by Cross.

After signing on to direct, Larnell spent considerable time with the real-life Roxanne Shanté (listed as an executive producer on the film) and had her full support in telling her tale. In a genre dominated by men, Shanté was a trailblazer. However, audiences will not get a comprehensive sense of hip-hop history here. Rather than a conventional music biopic about an ’80s hip-hop artist and her place in history, “Roxanne Roxanne” is more of a compelling personal saga that happens to be interspersed with music.

While there are some plot holes, the story we see on screen of a young girl’s fierce determination is riveting, and the performances are deeply memorable. A well-acted, inspiring story of female empowerment, the captivating “Roxanne Roxanne” is as much about survival and the bonds of family as it is about busting rhymes.