Paramount+ dropped the first trailer for its new “Rugrats” series on Wednesday, giving a look at some of the imaginary adventures the babies will have on the CG-animated revival.

The series will debut with an unspecific number of episodes, with the rest of the season to roll out on the streaming service at a later date. The hour-long premiere episode, titled “Second Time Around,” sees Tommy lead the babies on a daring adventure to help Chuckie after his big attempt to be brave goes horribly wrong. Warning: dinosaurs are involved. 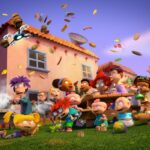 Based on the 1991 Nickelodeon series, the “Rugrats” revival follows a group of toddlers as they “explore the world and beyond from their pint-sized and wildly imaginative point of view.”

The series was created by Arlene Klasky, Gabor Csupo and Paul Germain. Eryk Casemiro and Kate Boutilier are executive producers on the revival, and Dave Pressler and Casey Leonard serve as co-executive producers. Rachel Lipman is co-producer, and production is overseen by Mollie Freilich, senior manager of current series animation at Nickelodeon.