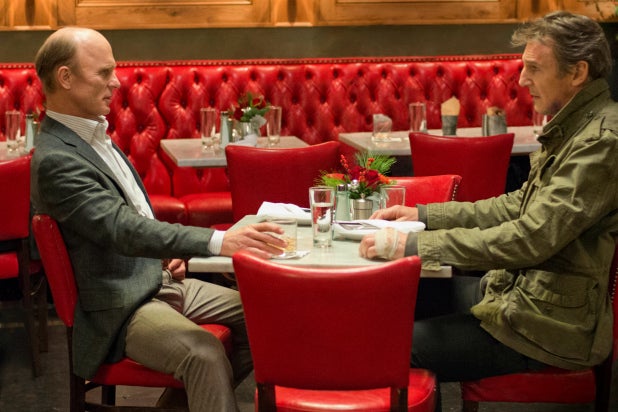 The layperson may think that all the films in the “Liam Neeson Kills a Bunch of People” genre are the same, but no; for example, if the movie in question has both the word “taken” and a number in the title, steer clear.

See Video: Liam Neeson Is a Hit Man Fighting to Keep His Son Alive in %u2018Run All Night%u2019 Trailer (Video)

If you had a blast at those movies, as I did, you’re more than likely to enjoy “Liam Neeson Kills a Bunch of People in One Night Before Christmas to Make Up for Previously Being a Lousy Dad,” hitting theaters under the more marquee-friendly title “Run All Night.”

We open with Neeson lying in a forest, bleeding from a shotgun wound, just to make it clear that, despite the leading man and the Yuletide setting, this is absolutely not a sequel to “Love Actually.” The film then launches back 16 hours to introduce us to Jimmy Conlon (Neeson), a boozy former hitman now reduced to playing Santa at a party for Danny Maguire (Boyd Holbrook, “Gone Girl”), the nev’er-do-well son of Shawn (Ed Harris), Jimmy’s former boss and the only friend Jimmy has left in the world.

This Christmas sees Jimmy once again estranged from family particularly son Mike (Joel Kinnaman), who doggedly remains on the straight and narrow to distance himself from his father — and the only person who seems to take any interest in Jimmy is Detective Harding (Vincent D’Onofrio), who still hopes to bust the retired button-man for all the Shawn-ordered hits of his past.

Chauffeur Mike, as bad luck would have it, witnesses Danny murdering two Albanian drug traffickers. As worse luck would have it, Danny pursues Mike to his house, where Jimmy shoots Danny to save Mike’s life. (And if you haven’t seen the trailer, trust me, this is just the set-up and not a spoiler.)

Jimmy confesses to Shawn, offering up his own life if Shawn will absolve Mike, but nothing doing; the grief-stricken mobster insists for the sake of revenge that Jimmy must live long enough see Mike get killed, threatening to put Mike’s wife Gabrielle (Genesis Rodriguez) and their two young children in the crossfire if anyone gets in his way. Thus begins an evening-long chase of Jimmy calling on all his professional know-how to save the son who hates him (the NYPD is no help, since Shawn and Danny had plenty of cops on the payroll) and the pursuit gets even hairier when Shawn throws professional assassin Mr. Price (Common), who has his own grudge with Jimmy, into the mix.

Collet-Serra and screenwriter Brad Ingelsby (“Out of the Furnace”) keep the action moving at a brisk pace, throwing in plenty of elaborate set pieces, including a high-speed cop-car chase through Queens, a fire in an enormous housing project and the crowds departing Madison Square Garden after a Rangers-Devils game. Between explosions, old pros Neeson and Harris paint a rich portrait of a long friendship turned into a brutal rivalry; Kinnaman is less successful with the bitter-son dialogue, but the film wisely keeps him from growing too forgiving too fast. (Would that the movie had found more for Nick Nolte and Bruce McGill to do as Jimmy’s brother and Shawn’s second in command, respectively.)

Cinematographer Martin Ruhe (“The American”) definitely subscribes to the Everything Looks Cool from a Helicopter school, transitioning from scene to scene with overhead swoops and zoom-ins in a style that could be called Google Earth Hopscotch. The set decorators work the holiday motif effectively into the film, although 2014 and probably only a Christmas movie nerd like me would even notice 2014 the seasonal flair all happens indoors and never outside, suggesting that the exteriors were shot before Thanksgiving or after New Year’s.

“Run All Night” has its flaws, to be sure — composer Junkie XL leans a little heavily on the “BWAH” that has quickly become a cliché in the years since “Inception,” and the third act is overly drawn out, a situation made all the more apparent by that opening shot that forecasts the climax. (There’s also a subplot about Jimmy’s mom being in the hospital, making us wonder why Shawn’s thugs never think to look for Jimmy there, but this is a movie where asking such questions is never encouraged.)

These minor issues aside, however, there’s a gritty, pulpy momentum to the film that keeps the pace propulsive, if not exhilarating. There’s not much new in this tale of grim men staring, and then shooting, each other down, but this cast and crew know how to spin this yarn with efficacy and economy.