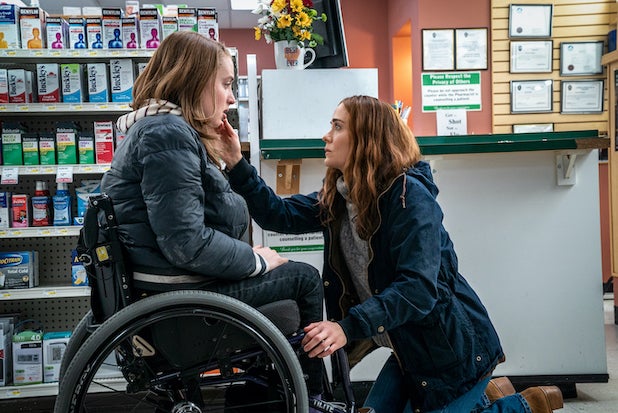 The producers of the Sarah Paulson thriller “Run” said that prior to casting disabled actress Kiera Allen in the lead role, they saw several actresses in auditions who claimed they used a wheelchair but were actually able-bodied.

“Run” producers Sev Ohanian and Natalie Qasabian along with director Aneesh Chaganty spoke in an interview with MovieMaker and said that, from the beginning, they were committed to casting a disabled actress. But in searching online, they came across several people who lied about using wheelchairs in their real lives.

“There were a couple of young ladies we saw that submitted themselves as people with disabilities. And we were like, wow, they’re really talented… but somebody looked them up on Instagram,” Ohanian said. “There were videos of them walking on the beach from like, two hours ago.”

Allen, a 20-year-old actress who made her feature film debut in “Run,” plays a home-schooled teenager who is kept sheltered and cooped up by her single mom, played by Paulson, only for her to suspect that her mom is hiding a dark secret from her. The director and producer felt from the beginning that getting a disabled actor in the role was crucial.

“It was never a controversial topic between the three of us. It was sort of like, ‘Yeah, we’re doing this right?’ ‘Yeah.’ ‘Cool.’ And then the process of actually finding this person proved to be an intense and countrywide sort of search. And we ended up finding this incredible talent in Kiera Allen,” Chaganty told MovieMaker.

“Run” was released by Lionsgate and is available on Hulu now. Check out the full interview with Chaganty, Ohanian and Qasabian here.