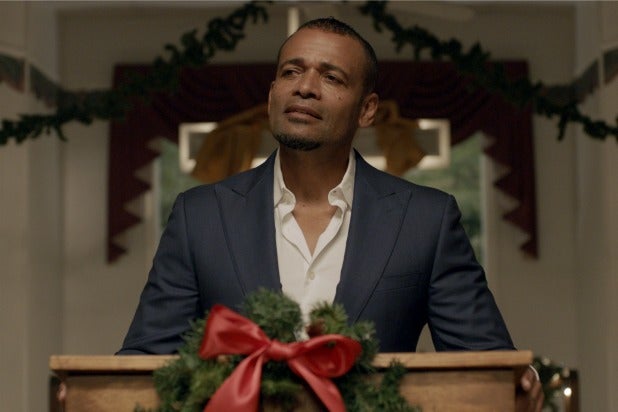 Executive produced by famously Christian retired football player Tim Tebow, “Run the Race” operates differently than most faith-based productions, in the apparent hopes of reaching a younger, wider audience that may or may not be inherently interested in religious entertainment.

Directed by Chris Dowling (“Where Hope Grows,” “Rock Slyde”), this is unequivocally a message-pushing drama, but one with a subtler touch and more artistic merit than many of its thematically linked predecessors.

Its kinetic opening sequence is a sharply edited (by Dan O’Brien, “CBGB”) series of shots following high-school quarterback Zach Truett (Tanner Stine, “The Thundermans”), as he scores nearly half a dozen touchdowns on game night to get noticed by a Florida Gators scout. All of it is set to rap music and executed with unexpected cinematic flair; in fact, the movie’s first act plays as though this were a secular sports movie.

Living in the economically depressed town of Bessemer, Fla., Zach — a white teen whose mother died when he was younger — is banking on getting an athletic scholarship to run away from this dying place. An injury, caused by attending a party where beer pong was being played, puts Zach out of commission and on the long road to recovery (physically and spiritually, of course) with the help of his kindhearted brother Dave (Evan Hofer), who suffers from seizures and is a devout believer.

Jesus talk comes in full force when Zach meets nurse intern Ginger (Kelsey Reinhardt, “Transparent”), who’s not pushy about her faith but makes it known that it defines her life. It’s a testament to the young actors’ genuine on-screen chemistry and nuanced performances — a rarity in Christian films — that their initial flirting and eventual romance is far from mawkish; one may even dare say it’s engaging.

Once Ginger reveals she is from a wealthy background, their relationship seems to suggest non-believers are not meant to have access to material riches: Zach doubts Jesus, thus poverty and misfortune are what he gets. Or so the movie appears to argue.

Still, unlike the abomination that the “God’s Not Dead” franchise has become, which condemns and tacitly wishes death upon those who don’t share in its beliefs, “Run the Race” doesn’t come off as mean-spirited, and that is absolutely deliberate. The film doesn’t directly attack anyone, because there are no characters in it that step out of line besides the boys’ alcoholic father (Kristoffer Polaha), and even he is given a sensible excuse for his behavior.

Though ranging in level of commitment, every character on screen is a churchgoing person or lives an acceptable lifestyle. No real opposition is presented. However, if you were to ask these characters what their thoughts are on, say, undocumented immigrants, police brutality, or the LGBTQ+ community, then the conversations might get dicey. But since the writers, all straight white men (Dowling, plus Jake McEntire and Jason Baumgardner), refrain from even mentioning those targets for right-wing ire, conflict is conveniently avoided.

Finessing their visual aesthetics, improving the acting quality, or giving the writing a dash of complexity beyond everything being part of God’s plan are not concerns for most productions of this kind. They serve a mostly functional purpose: to disseminate an agenda through unrefined storytelling that is unflatteringly explicit about its conservative ideology. That’s why any semblance of restraint in a Christian movie is like a drop of rain in the desert.

Part of what sets “Run the Race” slightly above its fellow Bible-thumping flicks is cinematographer Kristopher Kimlin’s (“I Can Only Imagine”) purposeful use of light, camera movement and focus throughout. Far from being revolutionary, it’s still noticeably more interesting than the flat, cheaply angelic palette that’s often the standard.

Unfortunately, this thoughtfulness is not replicated in the way music is employed. An unintentionally comedic element is that every time a song comes on, its lyrics blatantly and quite literally reflect what the characters are going through. Nevertheless, even if obnoxiously on the nose, the track selection is attuned to the goal of making religion more enticing. Needtobreathe’s sticky southern rock hit “Brother” is front and center for a reason.

Yet, as if eager to self-sabotage its chances at being a somewhat palatable, not grossly preachy example for future projects, the final minutes of “Run the Race” do away with any measure of moderation the film had previously exhibited. As happens in so many faith-based narratives, the filmmakers choose to subject the protagonist to a terrible tragedy, even when he has already repented for his lack of faith, because the only way he can truly understand that God loves him is through suffering. The culminating occurrence is so unnecessarily contrived it almost feels like a sadistic twist.

Tebow’s influence may drive “Run the Race” across the finish line of financial success, but the more significant achievement will be in the numbers of those who will see it not because of its faith-based content but despite it. After all, that’s the real objective for these films, not only to preach to the converted literally, but also to bring into the fold those who haven’t yet seen the light. The intersection of football, patriotism (plenty of flags here), and the visibility Dowling’s movie gives Trump-voting, detached white Americans is nearly a perfect plan, even more so when it’s not packaged like second-rate direct-to-video fare.