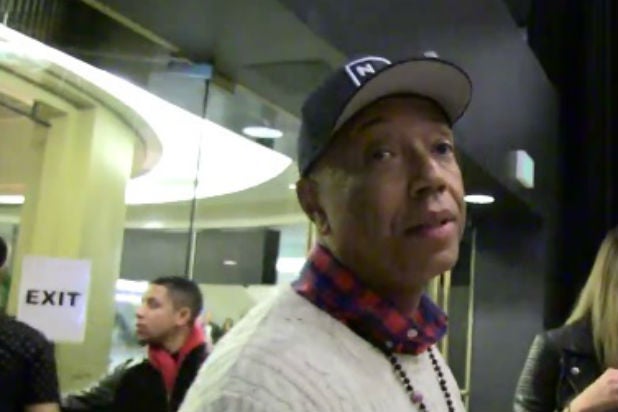 Russell Simmons is not taking Geraldo Rivera’s comments on rap music too seriously.

The Def Jam founder spoke out Wednesday night after Rivera made some disparaging comments about the effects of rap music on minority culture.

In response to Rivera, Simmons said: “He lost on ‘Apprentice,’ man. I can’t respect that.”

Simmons then assumed a more serious tone when he spoke about the origins of modern hip hop. “The prison industrial complex has got people so twisted. For forty years they’ve been locking up diseased drug addicts, educating them in criminal behavior, and dumping them back in the hood. The poetry is a refection of what comes from that.”

He said that Rivera is just attempting to grab media attention. “[Geraldo] used to do good work and help people. Now he’s just a talking head,” Simmons said. “He’s not relevant no more.”

During the interview about his run on the competition series, the Fox News correspondent suddenly shifted the topic to race and music.

“Hip-hop has done more damage to black and brown people than racism in the last 10 years,” Rivera said during a half-hour chat with HuffPost Live (his comments begin at 22:45).

“[Find a] youngster — a Puerto Rican from the South Bronx or a black kid from Harlem who has succeeded in life other than being the one-tenth of one-tenth of one percent that make it in the music business — that’s been a success in life walking around with his pants around his ass and with visible tattoos,” he said.

“I love , he’s a dear friend of mine. I admire his business acumen,” Rivera said, “at some point, those guys have to cop to the fact that by encouraging this distinctive culture that is removed from the mainstream, they have encouraged people to be so different from the mainstream that they can’t participate other than, you know, the racks in the garment center and those entry-level jobs.”

“I lament it. I really do. I think that it has been very destructive culturally,” he concluded.