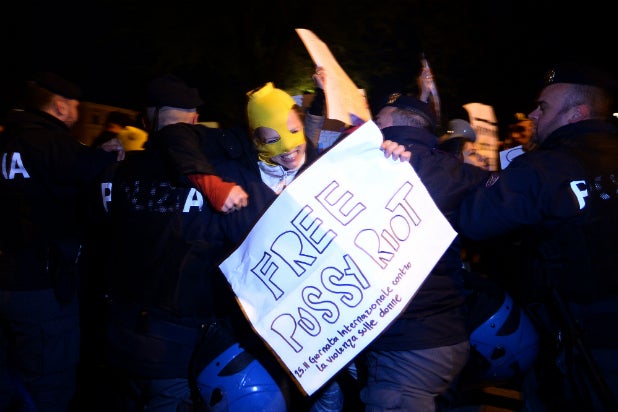 Russian officials are expected to free two members of the punk rock protest band Pussy Riot in early January under a sweeping new amnesty law that passed in the Russian parliament on Wednesday.

According to advocacy group Free Pussy Riot, because imprisoned members Nadezhda Tolokonnikova and Maria Alyokhina were nonviolent offenders and both have young children, they qualify for amnesty.

The law pardons a wide swath of offenders including pregnant women and mothers of young children, the sick or elderly, and minors serving short sentences, state-run Russian news agency RIA Novosti reported. Lawmakers passed the amnesty bill to mark the 20th anniversary of Russia’s post-Communist constitution as well as smooth over their country’s human rights record ahead of the Winter Olympics in Sochi in early February.

Tolokonnikova and Alyokhina had been convicted of hooliganism in 2012 after an impromptu protest performance with their all-female band against Russian President Vladimir Putin at a cathedral in Moscow.

The artists originally had a release date of March 3, 2014; if amnesty is granted, they could be released as early as Jan. 1.

Meanwhile, Russia’s Supreme Court has also ordered a review of Tolokonnikova’s and Alyokhina’s case, stating that the lower court that convicted the pair did not take into consideration their young age, peaceful intentions, and status as mothers in delivering their sentence. That review is currently slated for Jan. 24.