Netflix dropped a trippy teaser trailer for the second season of “Russian Doll” on Monday, which revealed the Natasha Lyonne comedy-drama will finally return on April 20.

In real life, it’s been three years since the first season premiered, but in the world of “Russian Doll,” four years have passed since Nadia (Lyonne) and Alan (Charlie Barnett) escaped an endlessly repeating time loop. Now, however, they are facing something even more serious, according to the streamer.

Season 2 of the show will “continue to explore existential thematics through an often humorous and sci-fi lens,” the streamer’s logline reads. “Discovering a fate even worse than endless death, this season finds Nadia and Alan delving deeper into their pasts through an unexpected time portal located in one of Manhattan’s most notorious locations. At first they experience this as an ever-expanding, era-spanning, intergenerational adventure, but they soon discover this extraordinary event might be more than they bargained for and, together, must search for a way out.” 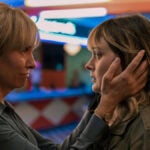 Also Read:
‘Pieces of Her’ Cast and Character Guide: Who’s Who in the Netflix Mystery Series?

The first season of the series was nominated for 13 Emmys and won 3.

Watch the teaser trailer above.