In a new statement issued Wednesday night through her attorneys, “Rust” armorer Hannah Gutierrez Reed once again denied having anything to do with the live rounds that ended up in the gun that killed the film’s cinematographer, Halyna Hutchins.

But while the statement did not openly suggest the killing was the result of sabotage, as her attorney did earlier in the day, regarding those live rounds, it did say, “Who put those in there and why is the central question.”

“Hannah Gutierrez Reed would like to add a few points to the continuing narrative on the tragic events surrounding the shooting on the ‘Rust’ set. First, Hannah was incredibly safety conscious and took her job very seriously from the moment she started on October 4th,” the statement reads.

“She did firearms training for the actors as well as Mr. Baldwin, she fought for more training days and she regularly emphasized to never point a firearm at a person. Never in a million years did Hannah think that live rounds could have been in the ‘dummy’ Round box. Who put those in there and why is the central question,” the statement continued. 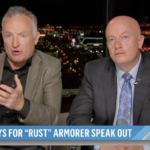 Gutierrez Reed, the statement continued, “kept guns locked up, including throughout lunch on the day in question, and she instructed her department to watch the cart containing the guns when she was pulled away for her other duties or on a lunch break. Hannah did everything in her power to ensure a safe set. She inspected the rounds that she loaded into the firearms that day.”

“She always inspected the rounds. She did again right before handing the firearm to Mr. Halls, by spinning the cylinder and showing him all of the rounds and then handing him the firearm. No one could have anticipated or thought that someone would introduce live rounds into this set,” the statement concluded.

On Wednesday morning’s episode of “Today,” Gutierrez Reed’s attorneys Jason Bowles and Robert Gorence said that she loaded the gun that killed Halyna Hutchins from a box labeled “dummy rounds” and that she inspected the rounds. They said what remains unknown is how a live round wound up in a “dummy” box, and they suggested that the round was put into the box deliberately by someone seeking to sabotage the production.

“The person who put the live round in that box had to have the purpose of sabotaging this set, there’s no other reason you would do that,” Bowles said. “I believe that somebody who would do that would want to sabotage the set, want to prove a point, want to say that they’re disgruntled, they’re unhappy. And we know that people had walked off the set the day before.”

Bowles was referring to a walkout by the film’s camera crew hours before Hutchins’ death to protest what they said were poor working conditions. Among their complaints were long hours on set, what they said were quick turnaround times, inadequate housing and the need to travel a far distance to set from their provided hotels. Some people also reportedly slept in their vehicles because of the distance from set to their lodging.

On Tuesday, star Alec Baldwin, who fired the gun that killed Hutchins and injured the film’s director (Joel Souza), while rehearsing a shot, reposted screenshots of an Instagram comment from costume designer Terese Magpale Davis that disputed some of those accusations of chaotic working conditions. Davis insisted that things were far better run than had been reported, and condemned much of the discussion about the tragedy on the “Rust” set as being from people who “weren’t there.”

No evidence of sabotage has been made public at this time, and the investigation into the incident is still ongoing.