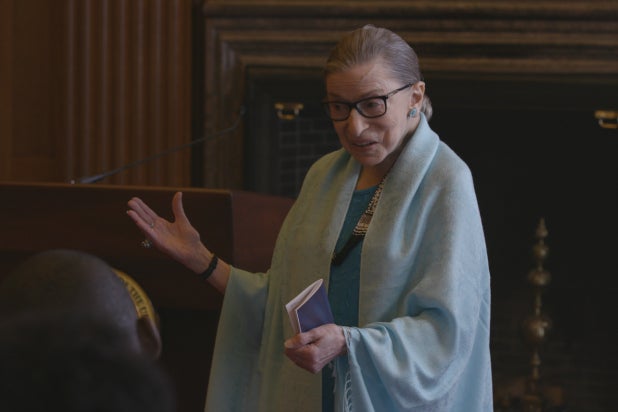 “Free Solo,” “Quincy,” “Minding the Gap,” “RBG,” “Three identical Strangers” and “Won’t You Be My Neighbor?” are among the films nominated for the Audience Choice Prize at the 2018 Cinema Eye Honors, an awards show devoted to all facts of nonfiction filmmaking.

“Bathtubs Over Broadway,” “Matangi/Maya/M.I.A.,” “On Her Shoulders” and “Shirkers” were also nominated in the Audience Choice category, which can be voted on by members of the public at the Cinema Eye website.

In the Broadcast Film category, the nominees were four docs from HBO – “Baltimore Rising,” “Believer,” “The Final Year” and “I Am Evidence” – plus “Nobody Speak: The Trials of a Free Press” from Netflix and “This Is Home: A Refugee Story” from Epix.

In the Unforgettables category, which recognizes the most interesting subjects of the year’s nonfiction films, the noncompetitive list includes a tennis instructor (Nick Bollettieri, “Love Means Zero”), a Supreme Court justice (Ruth Bader Ginsburg, “RBG”), a Hollywood pimp of sorts (Scotty Bowers, “Scotty and the Secret History of Hollywood”) and a beloved children’s television icon (Fred Rogers, “Won’t You Be My Neighbor?”).

Contenders for the Heterodox Award, which singles out films that mix narrative and nonfiction techniques, are “American Animals,” “Obscuro Barocco,” “Skate Kitchen,” “The Tale” and “We the Animals.”