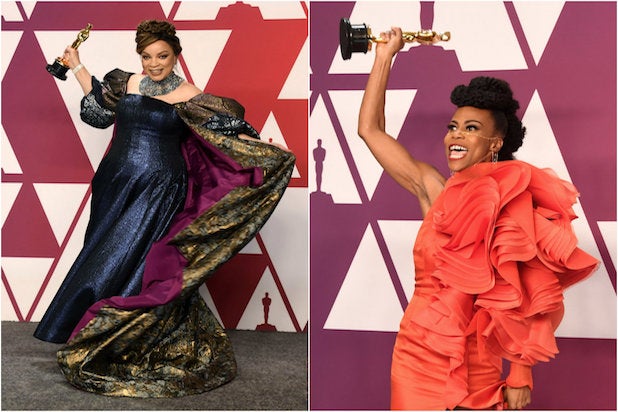 “Black Panther” colleagues Ruth Carter and Hannah Beachler made history at the 91st Oscars: They were the first black people to win Oscars in their respective categories.

Carter won for Best Costume Design and Beachler won for Best Production Design for their work on the hit Marvel film, and speaking backstage after accepting their awards, they shared why their achievements felt so significant.

“I dreamed of this night and I prayed for this night, not only for being a hard working costume designer, but what it would mean for people behind me,”  Carter said in the Oscars press room. “We won’t have to wait for another first. We have the first.”

Also Read: 35 Landmark Oscar Wins (and Losses) That Could Happen This Year

Beachler said that for her, taking this job wasn’t about her desire to work on “Black Panther” but about convincing Marvel that she would be right and worthy for the job. She offered some advice to any other young black girls who might have such aspirations.

“Don’t ever let anyone tell you you can’t do this craft. You are worthy, and you are beautiful, and this is for you,” Beachler said. “The advice that changed everything the most was when I arrived in Oakland all those years ago, with Ryan [Coogler], and he said, you know what, just be honest, just be truthful, just be you.”

Carter had some advice for her own younger self.

“I would tell my young self that, through the hard work, through whatever you might’ve felt, that you are doing the right thing,” Carter said. “But fear not, because tomorrow is yours.”

Beachler said when she stepped on the first completed set for “Black Panther,” the casino set, she kneeled down and cried, never believing that she would get to one day make something on the scale of a Marvel movie.

“It’s a collaborative medium,” Beachler said. “You lean on the people that you love. Your family. And I would consider Ryan and everyone else on ‘Black Panther’ part of my family.”