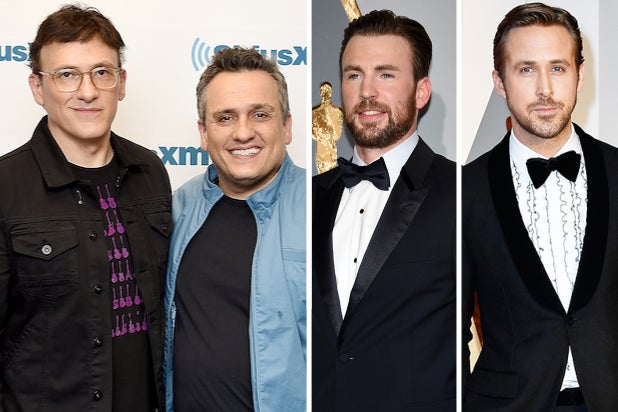 Ryan Gosling and Chris Evans are set to star in the next film from “Avengers: Endgame” directors Anthony and Joe Russo, a big-budgeted spy and espionage thriller called “The Gray Man” that the brothers will direct at Netflix with a budget that could exceed $200 million, an individual with knowledge of the project told TheWrap.

Joe Russo wrote the script based on the book and series “The Gray Man” by Mark Greaney for what could hopefully be a potential franchise at Netflix. Christopher Markus and Stephen McFeely also worked on the script.

“The Gray Man” follows Court Gentry (Gosling), a legend in the covert realm who is an expert at completing any lethal task and then disappearing. But he’s now being pursued by a former CIA colleague of his, Lloyd Hansen (Evans) once they feel that Gentry has outlived his usefulness.

Also Read: Russo Brothers Respond to Anthony Mackie's Call for More Diversity in MCU: 'We Can Always All Do Better'

“The Gray Man” hopes to begin production in January.

The book series dates back to 2009, and Greaney has written eight different sequels. The books have been meant to be turned into a franchise in the past, including with “Mission: Impossible” director Christopher McQuarrie attached and in a separate project starring Brad Pitt as directed by James Gray.

Netflix revealed on Thursday that it added 10.1 million more subscribers in Q2, and it also unveiled a rare look at viewership numbers. Bloomberg reported that “Extraction,” the action movie starring Chris Hemsworth and produced by AGBO, actually topped the list of most popular films in their first four weeks, notching 99 million views.