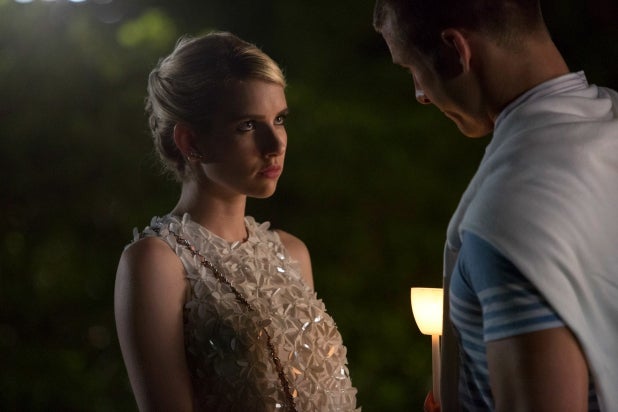 Based on big delayed viewing numbers, Fox is feeling bullish about “Scream Queens.”

Speaking to TheWrap Sunday, Fox Television Group Chairman and CEO Dana Walden said once Nielsen and multiplatform numbers for seven days of playback are available in two weeks, she expects the show to have earned in delayed viewing an audience comparable in size to what the broadcast premiere drew in live-plus-same day ratings on Tuesday night.

“We would be ecstatic with that,” Walden said.

Asked whether, should it meet her seven-day expectations and go on to maintain those numbers with future episodes, “Scream Queens” would be renewable, Walden — who oversees Fox Broadcasting and the company’s television-studio operations with colleague Gary Newman — responded, “Absolutely. If it continues to perform this way throughout a measurable period of time — where our advertisers are more inclined now to look at this type of performance, and we’ve got many sponsor partners on this show — this show is beyond viable. This is a show that any network would be happy to have, any streaming service would be happy to have.”

“I wouldn’t expect anything until after episode 6, which runs the Halloween week,” Murphy told TheWrap. “I wouldn’t expect or ask or even presume to get a season 2 pickup before then, because I don’t think it’s fair.” He added, “Now with the changing landscape, that’s how long it takes to get the data. I think that I understand now in a way that I didn’t before that Dana and Gary have an obligation to go to advertisers, who’ve put up a lot of money for this show, and say after five weeks, ‘Look, it all paid off, here’s the proof in the pudding.'”

Fox on Sunday released multiplatform and Nielsen delayed-viewing numbers for the “Scream Queens” premiere that revealed a total audience of 7.3 million viewers over the course of the premiere and three days of playback — up 80 percent from Nielsen’s live-plus same day audience for the Tuesday debut.

Those initial Nielsen numbers — a 1.7 rating in the 18-49 demo and 4 million total viewers — came in below Fox expectations. But the network points to the delayed viewing numbers and a strong performance therein in the 18-34 demo as evidence that “Scream Queens,” which Fox spent more on marketing than for any other new show this fall, that the show is an indicator of the changing ways in which younger viewers are consuming TV rather than a victim of lack of interest.

Murphy said that he spoke with Walden and Newman Wednesday after the initial live-plus-same day numbers came in.

“When I saw those numbers the next morning I was confused and a little upset,” Murphy said. “I called Dana and Gary and said, ‘This doesn’t make sense to me.'”  He spoke to them about seeing the show rank as the No. 1 trending topic on Twitter the night before, and not seeing that kind of interest reflected in the ratings. “They were good parents, as they always were, to me and said, ‘Wait a minute. Take a beat.’ Because based on their research that morning they were seeing a hug uptick on Fox.com. And they said, ‘Something is happening, but we don’t know what that is, and we’re not going to know for three days, and we might not really know for seven days or even 30 days.’ I think that’s what’s interesting now.”