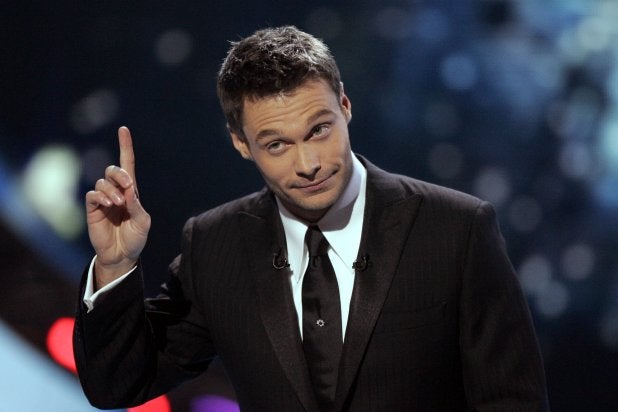 Ryan Seacrest isn’t ready to say goodbye to “American Idol” just yet. The host, who’s been with the show since its first season, has signed a deal that will bring him back for Season 14, an individual with knowledge of the situation told TheWrap. The deal also includes an option for a 15th season, should Fox renew the one-time ratings juggernaut.

His return had been expected. Last month, TheWrap reported that he was nearing a two-year extension of his “Idol” deal.

No official announcements have been made about the singing competition’s judging panel. Harry Connick Jr., Keith Urban, and Jennifer Lopez rounded out the panel for the current season, with original judge Randy Jackson sliding into a mentor role. There is no word on Jackson’s future with the show yet, either.

“American Idol” reached its ratings zenith during its sixth season, averaging 37.44 million total viewers. Ratings have declined since then, with “Idol” slipping from the number one spot for the first time during Season 11. While it isn’t the powerhouse it used to be, “American Idol” is still a solid performer for the network, ranking in the Top 10 most weeks.

Auditions dates for Season 14 have already been announced, with the competition series hitting 16 cities across the nation throughout the summer. It all kicks off in Minneapolis on June 18.