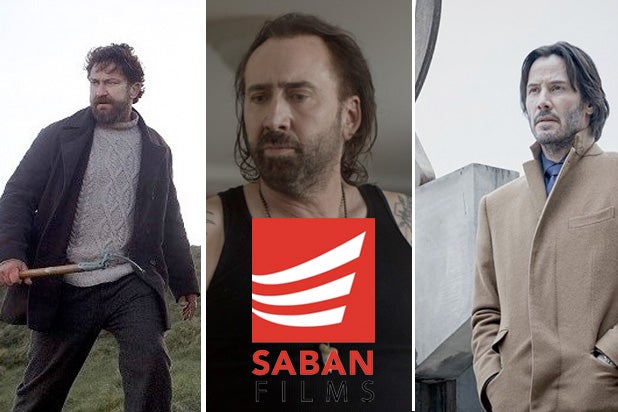 There were bigger yachts docked in the harbor at this year’s Cannes Film Festival, but production company Saban Films is returning to Hollywood with more movie acquisitions than any other bidder at this year’s international film market.

The spending spree comes weeks after its parent company sold the Power Rangers and other longtime Saban brands to toy giant Hasbro in a cash-stock deal worth $522 million.

TheWrap caught up with Saban Films President Bill Bromiley to discuss the gems they found in the South of France, their theatrical distribution ambitions and the increasing importance of finding films in their infancy.

What was the game plan headed into the festival?
We targeted a lot of films earlier on, so we knew about these titles and they were things we really wanted. When we head into a market, we usually don’t go in blindly. We don’t always get them, of course, but sometimes we do. It was a good one for us.

Domestic film markets have been pretty glacial in the last year, starting at Toronto continuing through this past Sundance. What surprised you most about the Marche?
There seems to be a lack of the very big films — the ones that would typically come from a studio, and usually wouldn’t affect our business, per se. The market lacked a little bit of pizazz that it had in the past. For us, from a business point of view, we found a bunch of product. We have a handful of others we’re still pursuing.

No one could decide how they felt about the level activity — everyone said it was dead, but we wrote multiple acquisition stories every day. What’s your take?
People associate activity with the big players spending a lot of money and buying movies for big price tags. Sometimes that can be a little misleading. We didn’t have much of that in this market. There are a lot of projects out there, and we had to dig a little deeper this year. The market is very healthy on the domestic side, and obviously our sales reflect that.

How does the sale of the “Power Rangers'” franchise to Hasbro impact you?
The Hasbro sale has nothing to do with [Saban Films], to be perfectly clear. Even though the Saban brands division is in our building and they’re colleagues of ours, it doesn’t affect our business whatsoever.

You have been distributing your films through Lionsgate. Any desire to strike out on your own?
We will continue our partnership with Lionsgate — it’s been very strong. We will increase our output this year slightly, and we want to do the same next year. We’re staring to slowly and carefully get into the theatrical business.

We bought something out of Sundance this year called ‘Lizzie,’ and we partnered with Roadside Attractions who is taking that out. And we have another title that will most likely go out traditionally. We are carefully growing our business.

And by “entering the theatrical business” you mean true co-releases, with marketing approvals and so on?
Correct.

Do you fear the streaming giants when you bid for films?
They certainly have the pockets to do it, and they can if they want to. If Netflix or Amazon wants a movie and we want it as well, in most cases they’re going to get it — because we’re not going to spend stupid money and try to outbid them. We’re happy doing the business model the way we do it.

Is the Marche activity encouraging as we look to Toronto in the fall?
We’ve never panicked that there was going to be a lull in the availability of films. What we’ve had to do the past couple of years is get involved in projects earlier. We’re happy to do so, and we’re finding that more than 50 percent of the product we now buy is at an early stage. That’s as early as script, or in production.

Are packaging teams like Endeavor Content, CAA Media Finance and UTA Independent Film crucial to your long-term plans?
I think so, yes.

You bought a majority of standalone films with high-profile names like Keanu Reeves and Nicolas Cage. Do you see Saban gravitating back to franchise IP?
You see a trend in the movies we bought in Cannes, and that trend is cash-driven, commercial films that lean domestic. We feel there’s a big need for that kind of product.

The smaller films are difficult. There’s less space to exploit them, now that DVD is a shrinking marketplace. There’s a lot less space to play with these. But the mid-range films still have a lot desire behind them and, in some cases, can be very successful. That’s our specialty, where we’re going to stick.