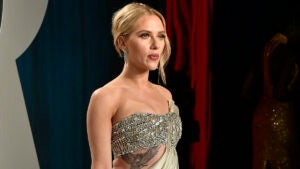 It has been two years since actor Matthew Modine lost his campaign for president of SAG-AFTRA, but his criticism of guild head Gabrielle Carteris has only become more pointed.

In an interview with TheWrap, Modine criticized the outgoing president as well as recently departed National Executive Director David White for their handling of the guild’s health plan. Over the past year, Membership First, Modine’s caucus within SAG-AFTRA, has spoken out about the decision made by the health plan trustees to increase the minimum earnings requirement to qualify for the plan and to no longer count residuals toward that requirement.

SAG-AFTRA has created a health care market to allow the thousands of retirees who would no longer receive coverage to find replacement Medicare supplement plans and set up informational meetings under Carteris’ direction to let members know about the changes. The plan trustees have maintained that the cuts were necessary to maintain financial solvency for the plan amidst rising healthcare costs nationwide.

But former SAG president Ed Asner and nine other senior guild members filed a lawsuit in December against White and the health plan trustees. Modine said that he has made the health plan the centerpiece of his campaign because “a core function of our union is to provide health care to all our members fortunate enough to find work and meet the earnings requirements to qualify.”

Carteris is not named as a defendant in the lawsuit as she not a trustee of the health plan and does not have direct influence over the plan’s finances, but Modine still placed blame on guild leadership for not providing advance notice to members of the plan’s financial problems. “It magnifies the absolute lack of transparency and foolish secrecy which is dismantling the basic foundational principles of our union,” he said. “The members deserve better.” 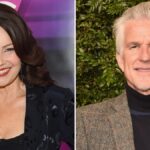 Modine also criticized Carteris’ implementation of intimacy coordinators, a new position on film and TV sets tasked with maintaining consent and upholding guild regulations regarding sex scenes. The creation and planned expansion of a network of intimacy coordinators has been touted by Carteris as one of her proudest achievements as president, but Modine said that the guild should have mandated their use as part of the bargaining agreement with studios.

Modine is campaigning against “The Nanny” star and LGBT activist Fran Drescher, who is running with Carteris’ Unite For Strength caucus and has Carteris’ endorsement. Ballots will be mailed on August 3 and tabulated on September 2.

Read the full email interview with Modine below. The interview has been edited for clarity. 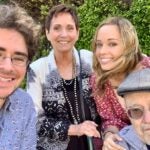 Also Read:
‘We Are Being Left Behind': Retired Hollywood Actors Protest Changes to SAG-AFTRA Health Plan

For Membership First, the issue with the SAG-AFTRA Health Plan is clearly the core of this campaign. What are your plans to address the loss of coverage for members if you are elected as president?
Yes, the Union’s Health Plan is, as you say, a core issue of this campaign. Why? Because a core function of our union is to provide healthcare to all our members fortunate enough to find work and meet the earnings requirements to qualify. In 2017 the AFTRA and SAG Health Plans were merged. At that time, President Gabrielle Carteris said, “We have positioned our health plan to be financially sustainable for all members for years to come.” and our National Executive Director, David White stated, “I am proud that the trustees worked together to arrive at solutions that strengthen the overall financial health of the plan while ensuring comprehensive benefits for all participants.”

Less than five years later, we see that their words were hollow and their excitement unsustainable. It’s important to note, Mr. White is also a member of the Board of Trustees. As a trustee, White knew, along with the other trustees, that the union’s health plan was perilously underfunded and in imminent risk of ruin. As the (National Executive Director), White had a fiduciary duty to explain this to President Carteris, so that during the last theatrical contract negotiations, Carteris and the negotiating team could find a way to add vital funds to the faltering health plan.

More recently, Carteris’ administration enthusiastically pushed all members to vote yes on a contract that would not include a path to protect the health plan. Just three weeks later they gutted it, pushing 11,750 members off the plan — 8,200 were seniors. That is why this debacle is a core issue of my campaign. This is a core issue for all of our members because it magnifies the absolute lack of transparency and foolish secrecy which is dismantling the basic foundational principals of our union. The members deserve better.

The first thing I will do, if elected, is appoint a committee to uncover and fully understand how this all could have happened. Understanding and exposing the truth is always the first, necessary step, in repairing and preventing things like this from ever happening again. What happened, to quote Shirley Jones is, “bullshit.” On my first day as SAG-AFTRA president, I will have a team in place to discover what actions can be taken to reestablish our lost health care benefits. 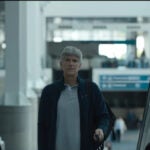 Under Gabrielle Carteris, SAG-AFTRA has begun developing a network of intimacy coordinators and has created a database for reporting sexual harassment incidents that occur on set. If elected, do you plan to continue the guild’s work addressing #MeToo?
I’m glad you asked about this. This important work is being led by L.A. Local board member, and my Membership First colleague, Pamela Guest. Ms. Guest heads the Los Angeles Committee on Sexual Harassment and helped form the Sexual Harassment Work Group in 2017. Guest, and her team, are the leaders in acknowledging and working with intimacy coordinators in all our working environments. They also were the first with co-chair Jessica Barth’s Voices in Action (VIA) to create an anonymous reporting app for our members. The committee is working to improve the culture and working conditions in the many locations our members work.

Unfortunately, under Carteris, these very achievable goals were not implemented in any meaningful way. What good is reporting misconduct if there is no retribution for an offense or any means of tracking offenders? What good is a network of ICs with no industry requirement to use them? In our last contract negotiation, we had a golden opportunity to have actual contract language put in place to secure that ICs have a place in our Industry. That opportunity was squandered. As the SAG-AFTRA president, I will make sure that all our members are protected where needed. That includes, when necessary, having ICs on set.

As an aside, over the course of my own career, I’ve experienced, firsthand, how beneficial intimacy coordinators could have been. I’ve heard directly from my co-stars about painful, uncomfortable situations they’ve been put under while auditioning for work and during productions. We’ve seen the painful stories that have occurred on the film stages and television news productions. The first important step in correcting these situations was the #MeToo movement. The many survivors who stepped forward told their stories let light into the dark space of sexual assault and harassment. Now, it’s each of our responsibility to continue their work and make sure that light stays on. As the SAG-AFTRA president, I assure you, these kinds of contract provisions will not be overlooked.

Both you and Membership First have argued that the guild has not gone far enough in its contract negotiations to secure better terms. Aside from higher contributions to the guild health plan, what other contract points do you feel the guild could negotiate to a better position on?
As a future negotiator, it’s important to keep my cards hidden from those with whom I negotiate. More importantly, it’s vital to our members to participate in robust “wages and working conditions” town halls. Our union is meant to be for the members, by the members. As an elected leader, you simply must hear from and listen to the concerns of members. As president of the Union I promise to negotiate stronger contracts. This includes streaming residuals. This is the primary issue for my fellow members. For the top wage earners in our union, residuals may not be their financial life’s blood, but they are for the great majority of our community.

One of the things I all too often hear from the mouths of current leadership, is how they refer to our union as “the union.” As if it is out there, away from us, some arbitrary thing. SAG-AFTRA is, above all else, a member’s union. I believe we have such low voter turnout because members feel disenfranchised. Young actors today often say “Why do I need to join the union?” “What does the union do for me?” This frustrates me because when I joined the Union it was a badge of honor. Joely Fisher and I joined around the same time and together we are very enthusiastic about restoring pride and purpose to membership.

Less than half of guild members voted in the last election. Given what has happened during the pandemic, do you feel there’s a chance that the membership may be more engaged with what is happening in their union?
Our members, like everyone, have lived through and endured the impact of a global pandemic. With the lack of productions and employment, our members have been struggling to buy food and pay their rent. In order to be able to vote in this election, they will have had to pay their membership dues. I’m going to guess and say that paying union dues was a low priority for many.

This election, Carteris should have lifted that rule and allowed all members with a card to participate in the process. If elected, I’m eager to re-empower all of our members and the good news is I have an incredible group of brilliant, out-of-the-box problem solvers working with me. I have the incredible Joely Fisher running with me for Secretary Treasurer. I have support from Jane Austin, who has done so much incredible outreach to the 25 locals across the country. I’m thrilled that my running mate from the last election, Jodi Long is running for president of the Los Angeles Local.

Joely, Jane and Jodi are true unionists with decades of boots on the ground experience. They understand that their leadership positions are not roles to be played but a tremendous responsibility taken and made for our members. Membership First also has the support of many of our unions youngest members who are counseling me on the specific needs they’re facing today. Together we are finding workable solutions and putting plans in place so we are ready to implement them. 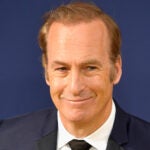