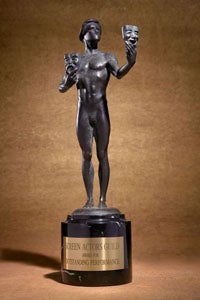 Final ballots to select the recipients of Screen Actors Guild awards for the year’s best performances in film and television were mailed Tuesday to the organizations’ nearly 100,000 members, the guild said in a statement. Nominations were announced earlier this month.

Voters will have less than a month to determine who should be going home with the award’s signature statue of a classical nude (…with some strategic buffing ) hoisting the masks of comedy and tragedy aloft .

Ballots are due on Jan. 21. The 16th Annual Screen Actors Guild Awards ceremonies will be held on Jan. 23 at the Los Angeles Shrine Exposition Center and will be broadcast on TNT and TBS.