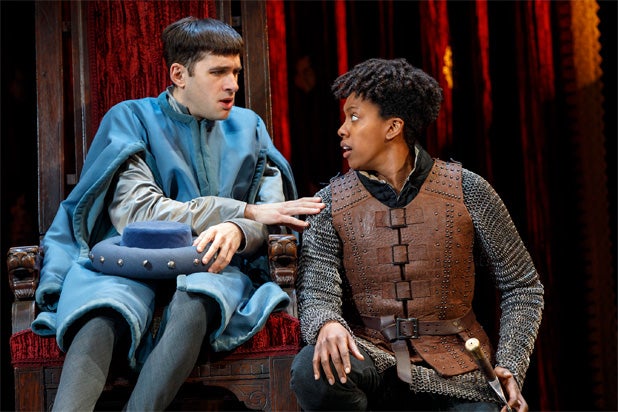 Sightings of the world’s most popular transgender saint have become an annual event in New York’s theater world. The latest appearance is one of the most vivid we faithful have received of late. Condola Rashad is strong, tough and more than a little nuts in George Bernard Shaw’s “Saint Joan,” which opened Wednesday at MTC’s Samuel J. Friedman Theatre.

Rashad does not turn Joan into John, but her maid of Orleans looks as though she could wallop any of the 17 men in the cast. With some help from heels and buoyant hair, she matches, if not exceeds, the height of the guys around her. Only John Glover’s Archbishop towers over her. Then again, under his robes, like so many men in their priestly drag, he too may be wearing high heels.

On the New York stage, Rashad has been more successful in contemporary dramas (“A Doll’s House, Part 2” and “Stick Fly”) than Shakespeare (“Romeo and Juliet” and “Taming of the Shrew”). Shaw is somewhere between the two, and she pulls “Saint Joan” into this century with a performance that is both ironic and wide-eyed. That wonderful contradiction, between being informed and foolish, galvanizes the production, and makes her irresistible to watch.

Director Daniel Sullivan has achieved similar comedic alchemy with Adam Chanler-Berat’s dunce of a Dauphin, who rules with his eyes wide shut, and achieves our sympathy by being so thoroughly self-centered.

It’s the 15th century, and yet Jack Davenport, in his magnificent Broadway debut, manages to seem utterly contemporary in his machinations to have the cross-dressing Joan burned at the stake. In another of those wonderful contradictions, he makes evil attractively commonplace.

Nothing is ever commonplace when Patrick Page is on stage. With his inimitable bass voice and striking presence, he is one actor who never should be double cast. He first appears as Robert de Baudricourt, the maid’s first stepping stone to fame. He introduces her to the Dauphin, and is agreeable to Joan’s demands, mainly because Robert’s tired of the girl’s harping and needling him.

When Page reappears much later as the Inquisitor himself, it’s impossible to get his Robert out of your head. How did this good guy turn bad so fast? Regardless, the actor delivers the play’s standout moment. Page, taking his lowest-of-low bass to its very sonorous depths, persuades with his speech on the mercy of persecuting heretics. It’s a perfectly perverse moment.

The only actor who appears not to have received Sullivan’s memo on irony is Daniel Sunjata. His straight-forward Dunois is right out of Robert E. Sherwood, not anything written by George Bernard Shaw.

Scott Pask’s set turns the stage into a huge pipe organ. Jane Greenwood’s costumes look like something from a touring production of “Spamalot.” There’s visual humor at work here, but unlike most of the performers, both designers miss the mark.