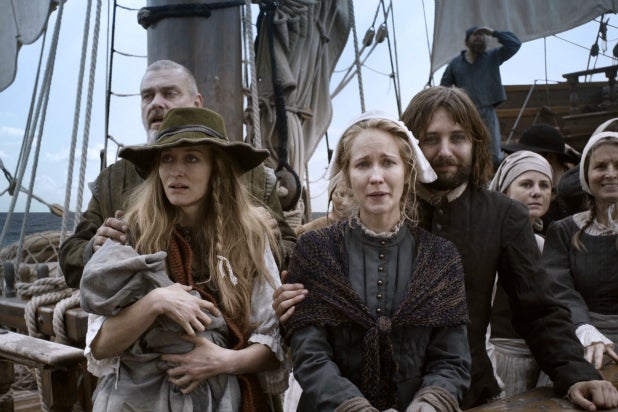 Worthy themes and a thoughtful tone only go so far in “Saints & Strangers,” a sobersided miniseries that seeks an honest recounting of the first Thanksgiving between the Pilgrims and Native Americans. This two-night National Geographic Channel event can’t be faulted for its earnest, intelligent examination of how different cultures unavoidably come into conflict. But rather than giving the eventual clash a despairing inevitability, the storytelling is merely perfunctory, failing to pull many insights out of an all-too-familiar societal truth.

Debuting Sunday and concluding the following evening, “Saints & Strangers” wants to add a little historical accuracy and a dose of cold reality to viewers’ upcoming Thanksgiving festivities. Longtime television episodic director Paul A. Edwards (“Sleepy Hollow,” “Lost”) goes for a stripped-down, realistic atmosphere in his portrayal of the English men and women who made it to North America in 1620 looking for everything from a fresh start to religious freedom. From the miniseries’ outset, we pick up on unmistakable tensions among these Pilgrims, as Vincent Kartheiser‘s soft-spoken, deeply religious William Bradford butts heads with Ray Stevenson‘s , a coarse man who had been found guilty of mutiny during a previous trip to the New World.

Of course, the challenges aren’t just between each other: The Pilgrims will also face harsh weather, an inhospitable New England terrain and, of course, the ever-present danger of Native Americans, personified by Massasoit (Raoul Trujillo), the stoic but honorable leader of the fearsome Pokanoket tribe. Although Edwards’ camera captures the untamed beauty of this virgin land, “Saints & Strangers” never strays too far from a sense of edgy uncertainty, ensuring that we always feel the life-or-death urgency of these Pilgrims as they labor to build a life from scratch at the Plymouth Colony. (That feeling of uncertainty is only heightened by the fact that not all the miniseries’ higher-profile names, including Anna Camp, Ron Livingston and Natascha McElhone, will survive Part 1.)

Once the English encounter the Pokanoket, the show’s central conflict comes into focus: The Pilgrims initially fear what the Native Americans might do them — referring to the Pokanoket as “savages” probably didn’t help soften relations — while Massasoit wonders if he should accept their offer of peace and friendship. Edwards works hard to give the two sides of this tense stalemate the proper shading, insisting we see the situation from both perspectives.

Likewise, the performances, though sometimes a bit one-dimensional, strive to reveal the shared humanity in the Pilgrims and Pokanoket. “Saints & Strangers” probably tilts its sympathy slightly toward the Native Americans, but Bradford and his comrades aren’t demonized in order to score easy P.C. points. Kartheiser, in particular, exudes measured, conscientious decency that, as we’ll discover, doesn’t preclude his character from having his judgment compromised by misjudged loyalties.

Nonetheless, “Saints & Strangers” plays out as an overly glum cautionary tale about the perils of mistrust, Edwards slowly setting into motion a predictable chain of events in which a fragile truce between the two peoples will gradually crumble. Much rests in the hands of Squanto (Kalani Queypo), the sole surviving member of another tribe that was wiped out by disease, who serves as interpreter between the English and the Pokanoket, although the actor’s fiendish look suggests early on that Squanto’s intentions aren’t as noble as they appear.

That lack of dramatic subtlety affects “Saints & Strangers” as a whole: Whether it’s the miniseries’ criticism of blind religious devotion or the escalation of tensions between the two peoples, the storytelling (with a script credited to, among others, Walon Green and Chip Johannessen) tends toward the obvious, as if the historical events necessitated a somber, blunt, pedestrian treatment in order to dramatize them faithfully. There’s an aching sadness in the margins of “Saints & Strangers” — how people of good intention can still destroy themselves, and how this country’s founding was forged in blood and genocide — but the ho-hum execution doesn’t do enough to give America’s bittersweet origin story the emotional wallop it deserves.

The solidarity of Thanksgiving is so yesterday. Black Friday can inspire some of the most unexpected in Americans

Hold on to your humanity